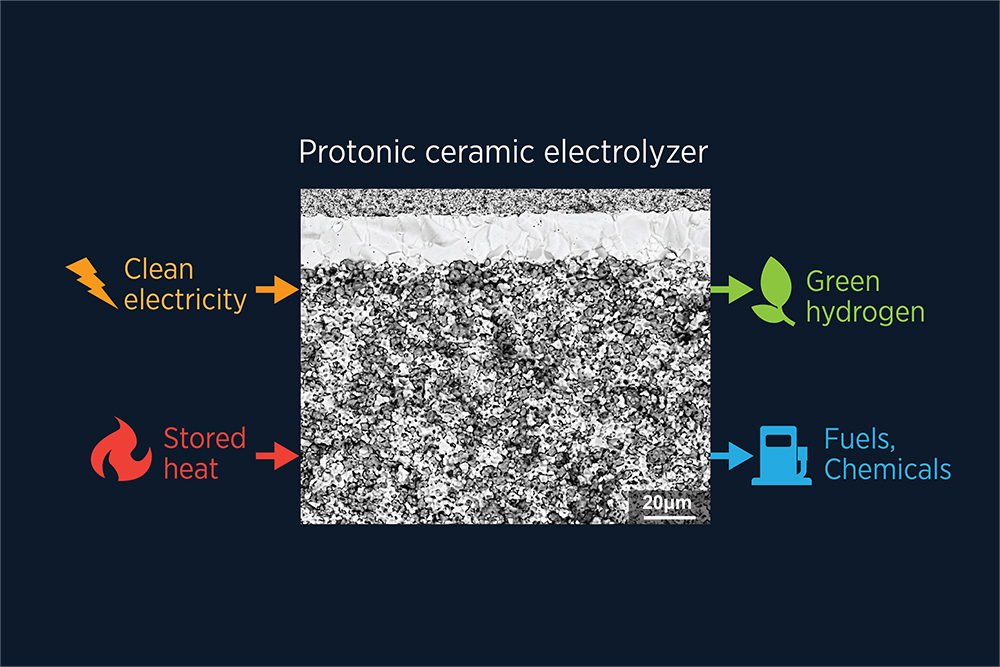 Clean electricity and stored heat from nuclear power and intermittent electricity from wind and solar can be efficiently converted to green hydrogen, fuels and chemicals using protonic ceramic electrolyzers with exceptional performance and stability.

The reduction in the use of fossil fuels will have unintended consequences for the power generation industry and beyond.  For example, many industrial chemical processes use fossil fuel byproducts as precursors to things like asphalt, glycerine, and other important chemicals.One solution to reduce the impact of the loss of fossil fuels on industrial chemical processes is to store and use the heat that nuclear fission produce. New research has dramatically improved a way to put that heat toward generating chemicals through a process called electrolysis.

Electrolyzers are devices that use electricity to split water (H2O) and generate molecules of hydrogen (H2) and oxygen (O2). Hydrogen is used in fuel cells to generate electricity and drive electric cars or drones or in industrial operations like the production of steel, ammonia, and polymers. Electrolyzers can also take in water and carbon dioxide (CO2) and produce oxygen and ethylene (C2H4), a chemical used in polymers and elsewhere.

There are three main types of electrolyzers. One type works at room temperature, but has downsides. They’re inefficient and require rare metals like platinum. A second type is more efficient but runs at high temperatures, above 700º Celsius. But metals corrode at that temperature, and the devices need expensive sealing and insulation. The third type would be a Goldilocks solution for nuclear heat if it were perfected, running at 300º to 600° Celsius and requiring mostly cheap materials like stainless steel. These cells have never been operated as efficiently as theory says it should. The new work, published this month in Nature, both illuminates the problem and offers a solution.

The intermediate-temperature devices use what are called protonic ceramic electrochemical cells. Each cell is a sandwich, with a dense electrolyte layered between two porous electrodes. Water vapor is pumped into the top electrode. A wire on the side connects the two electrodes, and externally generated electricity runs from the top to the bottom. The voltage pulls electrons out of the water, which splits the molecule, releasing oxygen. A hydrogen atom without an electron is just a proton. The protons get pulled through the electrolyte to rejoin with the electrons at the bottom electrode and form H2 molecules, which are then collected.

On its own, the electrolyte in the middle, made mainly of barium, cerium, and zirconium, conducts protons very well. “But when we put the same material into this three-layer device, the proton conductivity of the full cell is pretty bad,” says Yanhao Dong, a postdoctoral researcher in MIT’s Department of Nuclear Science and Engineering and a paper co-author. “Its conductivity is only about 50% of the bulk form’s. We wondered why there’s an inconsistency here.”

A couple of clues pointed them in the right direction. First, if they don’t prepare the cell very carefully, the top layer, only about 20 microns (.02 millimeters) thick, doesn’t stay attached. “Sometimes if you use just Scotch tape, it will peel off,” Dong says. Second, when they looked at a cross section of a device using a scanning electron microscope, they saw that the top surface of the electrolyte layer was flat, whereas the bottom surface of the porous electrode sitting on it was bumpy, and the two came into contact in only a few places. They didn’t bond well. That precarious interface leads to both structural delamination and poor proton passage from the electrode to the electrolyte.

The solution was simple. They roughed up the top of the electrolyte. Specifically, they applied acid for ten minutes, which etched grooves into the surface. Ju Li, the Battelle Energy Alliance Professor in Nuclear Engineering at MIT, and a paper co-author, likens it to sandblasting a surface before applying paint to increase adhesion. Their acid-treated cells produced about 200% more hydrogen per area at 1.5 volts at 60° Celsius than did any previous cell of its type, and worked well down to 350º Celsius with very little performance decay over extended operation.

“The authors reported a surprisingly simple yet highly effective surface treatment to dramatically improve the interface,” says Liangbing Hu, the director of the Center for Materials Innovation at the Maryland Energy Innovation Institute, who was not involved in the work. He calls the cell performance “exceptional.”

“We are excited and surprised” by the results, Dong says. “The engineering solution seems quite simple. And that’s actually good, because it makes it very applicable to real applications.” In a practical product, many such cells would be stacked together to form a module. MIT’s partner in the project, Idaho National Laboratory, is very strong in engineering and prototyping, so Li expects to see electrolyzers based on this technology at scale before too long. “At the materials level, this is a breakthrough that shows that at a real-device scale you can work at this sweet spot of temperature of 350° to 600° Celsius for nuclear fission and fusion reactors,” he says.

“This is very significant for both Idaho National Lab and us,” Li adds, “because it bridges nuclear energy and renewable electricity.” He notes that the technology could also help fuel cells, which are basically electrolyzers run in reverse, using green hydrogen or hydrocarbons to generate electricity. According to Wei Wu, a materials scientist at Idaho National Laboratory and a paper co-author, “this technique is quite universal and compatible with other solid electrochemical devices.”

Dong says it’s rare for a paper to advance both science and engineering to such a degree. “We are happy to combine those together and get both very good scientific understanding and also very good real-world performance.”

This work, done in collaboration with Idaho National Laboratory, New Mexico State University, and the University of Nebraska–Lincoln, was funded in part by the U.S. Department of Energy.

Written by Matthew Hutson. Rendering courtesy of the researchers.