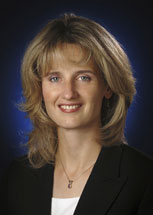 Lisa Porter: A New Breed of Research for National Security

Nuclear engineers are trained to tackle large, multi-disciplinary challenges. And Lisa Porter (B.S. in Nuclear Engineering, 1989) credits that perspective with helping her handle a national-security research management task that's more than a little daunting: developing innovations that have the potential to provide the U.S. with an "overwhelming intelligence advantage over future adversaries."

Lisa Porter took the reins of the U.S. Intelligence Advanced Research Projects Activity (IARPA) in 2008, upon its creation as part of a broad, post-9/11 initiative to make the U.S. intelligence community more collaborative, efficient, and effective. IARPA's goals are both tremendously challenging and critically important in today's world: improving the value of information that is collected, maximizing insight from that information, and assuring the security of information, while at rest and in motion.

Most of IARPA's high-risk, high-reward research efforts involve technology innovations in fields like IT and electronics, but the nature of the organization's work goes far beyond the stereotypes of "spy gadgets" and James Bond movies. Indeed, much of its activity requires an uncommon degree of interdisciplinary integration, with substantial contributions coming from linguistics, anthropology, psychology, and other fields in the humanities and social sciences.

"We're much smaller than a university, but we have a lot of the same disciplines, because all of those things matter when you're trying to provide decision-makers with insights into complex issues," says Porter. "Maybe we can build a sensor that's half the size and twice the resolution and runs on less power. But what will the impact be on what we really need to know? How will we determine if we're improving an analyst's ability to do his job? It's very important to understand that the mission of the intelligence community is to provide insight, knowledge, and perspective."

It's hard to imagine direct preparation for such a novel job, but Porter has an award-winning background in research management at NASA and the Defense Advanced Research Projects Agency (DARPA), on which IARPA (an arm of the Office of the Director of National Intelligence) was modeled. And some of the most fundamental preparation, she says, came during her undergraduate years at NSE.

"There was a heavy emphasis on system engineering – ultimately, what you're learning to do is design and build a complex system," explains Porter, who recalls Prof. Ronald Ballinger eloquently making this point to her and several of her undergraduate classmates. "That's what makes Course 22 special – you get to see how fluid dynamics, heat transfer, statistics, nuclear physics, and math all combine. The range of disciplines is a very cool part of the course, and the ability to see how systems integrate has been very valuable."

Porter's undergraduate study of Russian language and literature has also helped, in areas like IARPA's program in socio-cultural content in language. "Our work is not just translating words, but seeing what the use of language tells us about meanings and subtexts. The more you understand that, the more you know about a culture, and peoples' perceptions and insights," notes Porter.

As important as this fund of knowledge is, Porter's time at NSE also infused her with something less tangible but just as essential: the ability to constantly question assumptions. "There's a challenging of authority at MIT, a willingness to say, 'why is that so?' and 'why should I accept that?' You see it across the campus, and it's very important," she says. "I've brought that attitude to every job I've had. Sometimes it gets you into a bit of trouble, but it's a good attribute, especially if you're going to be a leader and make decisions. If you're a real scientist or engineer, that's part of who you are."

“There's a challenging of authority at MIT, a willingness to say, 'why is that so?' and 'why should I accept that?' You see it across the campus, and it's very important. I've brought that attitude to every job I've had. Sometimes it gets you into a bit of trouble, but it's a good attribute, especially if you're going to be a leader and make decisions.”