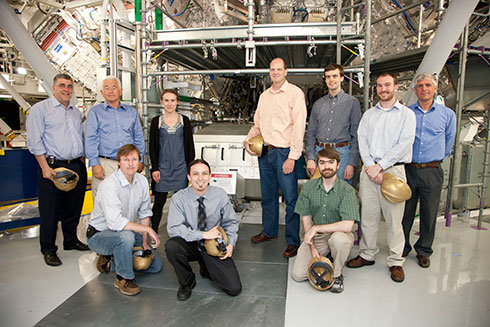 In 2010, after a decade of meticulous preparation, Daniel Casey and an MIT team finally ran their experiment. The world’s largest laser struck a millimeter-sized target, and in less than a second, it was all over. Casey, now a post-doctoral associate in MIT’s Plasma Science and Fusion Center, recalls, “You heard a little pop, but there was no other sight or sound in the control room.” Yet if the moment itself proved an anticlimax, the experiment has paid off in spades, yielding data that opens a window onto extreme conditions found nowhere else on Earth, and starting a new chapter in high energy density physics.

The home for this novel research is the Lawrence Livermore National Laboratory’s National Ignition Facility (NIF), which came on line in 2009. Casey has devoted his graduate and post-graduate years to designing and refining research related to the NIF, whose goals include reproducing the intense temperatures and pressures inside stars, and illuminating their vast energy-generating processes. Casey’s Nuclear Science and Engineering thesis was the very first doctoral thesis to emerge from the NIF — foundational work that will enable the nation to move closer to fusion energy — an endlessly renewable, sun-like power.

To attain this end, scientists must first achieve fusion ignition. Using enormous amounts of energy, researchers hope to trigger a thermonuclear conflagration that will ideally generate energy in excess of that used to start the reaction. NIF was built for undertaking this grand scientific challenge. In this building three football fields long, 192 laser beams combine to strike a pellet containing hydrogen, achieving temperatures greater than 100 million degrees and pressures greater than 100 billion times Earth’s atmosphere — just the kind of conditions thought necessary for fusion ignition and energy gain. MIT is the principal university participant at the NIF, and as “a big player,” says Casey, is deeply involved in the planning and execution of a wide range of experiments.

Among the MIT research group at NIF, Casey has played an integral role. He has focused on designing and developing an instrument called a magnetic recoil spectrometer (MRS), which Casey describes as “a primary diagnostic in the ignition campaign.” (Testing a prototype of this spectrometer at the University of Rochester’s smaller OMEGA laser facility was a major part of Casey’s thesis.) When NIF’s lasers hit a small capsule of deuterium and tritium (isotopes of hydrogen) with 1.8 mega joules of highly focused energy — that’s a trillion watts of power delivered in a billionth of a second — the capsule implodes, creating a massive level of compression, and a reaction that generates extremely high temperatures and sends out alpha particles and neutrons.

The MRS spectrometer captures those neutrons cast off by the implosion, and uniquely measures some critical parameters of the experiment. Deploying original laboratory and software methods, Casey analyzes such data as ion temperature, the areal density, and the number of fusion reactions — the fusion yield. “This has never been done before,” notes Casey, “and it’s why we built this thing — to bring an essential and unique capability to the ignition campaign.”

Getting these parameters just right is key to achieving ignition, and the MRS, believes Casey, will be “one of only a few diagnostics used to demonstrate that ignition occurs, and more important, will be one of a few diagnostics used to get there.” With the MRS in place, and scientists currently performing experiments, actual ignition “could be as soon as this summer…or not,” says Casey. “It turns out to be a very hard problem, but I hope to see fusion energy in my lifetime.”

While he finds the government’s plasma fusion energy campaign inspiring, Casey also thrives on other kinds of basic scientific research on the NIF, such as understanding the slow, churning fusion reactions inside stars. “We can’t easily look directly into the core of the sun, we can’t put a thermometer in there, but now we can build a little star here on Earth.”

Casey envisions continued involvement with a range of NIF experiments. Should he be lucky enough to witness ignition, there will be plenty of challenges left, since ignition is simply “a stepping stone to making energy.” Whatever comes next, Casey regards it as “an honor to be involved in this important national effort.”