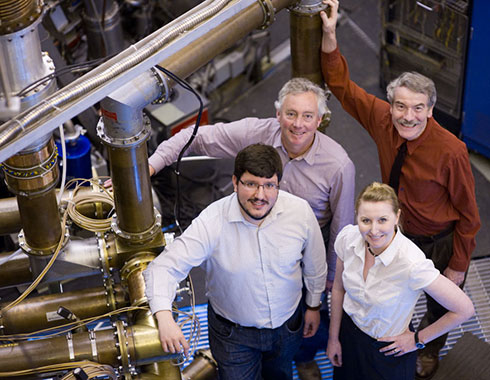 Nuclear fusion is a seemingly ideal energy source: carbon-free, fuel derived largely from seawater, no risk of runaway reactors, and minimal waste issues. With the world’s energy supply chain facing intense environmental, economic, and political pressures, fusion’s appeal is growing and international collaboration is accelerating. And MIT NSE’s long-standing fusion program is extending its leadership role in advancing the technology towards practical use.

NSE’s Plasma Science and Fusion Center (PFSC), home of one of just three US tokamak fusion reactors, has been a focal point of fusion research since its founding in 1976, developing substantial basic knowledge about creating and maintaining fusion reactions. And today, explains Prof. Dennis Whyte, NSE’s fusion team is beginning a strategic pivot into the next stage of development, with a focus on interdisciplinary knowledge needed for the creation of functioning power plants.

Fusion reactors, like PFSC’s ALCATOR C-Mod, rely on the same mechanism that powers stars — collisions between atomic nuclei at extremely high temperatures (over 100 million degrees). At those temperatures, the  natural repellence of nuclei to one another is sometimes overcome, allowing them to fuse. Hydrogen isotopes deuterium and tritium, the leading fuel candidates, ionize into a plasma when heated; their fusion creates a helium isotope and a neutron, while releasing nuclear energy.

“We’re basically making energy by creating a star,” explains Whyte. “For power generation, the star has to turn on, and stay on for a year at a time, and we need a way to extract the energy it creates.”

Whyte says fusion researchers have substantially solved the first of the three problems. The next stage, he explains, will require an evolution beyond the traditional focus on plasma physics, and towards practical power-plant issues that arise out of the need to maintain a continuous, self-sustaining “burning plasma.” This includes developing a better understanding of how materials behave under intense neutron and plasma bombardment.

Neutron bombardment creates big challenges, displacing every single atom within exposed material 20 times in a year.  Moreover, surface atoms would be displaced by plasma particles about a billion times annually.  “The environment is constantly making and remaking the material,” says Whyte. “Amazingly, we think we can make this work, by developing an understanding not just of the plasma and the materials, but of their interaction. We have the leading effort here in that area.”

Whyte notes that in order to make fusion a reality, “we need to start thinking about fusion like nuclear engineers, building reliable power plants…it’s going to take a whole new generation of scientists who understand plasma physics, materials science, nuclear science, and other issues at a very deep level. That’s what I find very exciting about our efforts and our students — they bridge this entire spectrum. I’m proud to have Ph.D. students who are not working on plasma physics — they’re using advanced nuclear detection methods to prove what’s happening to materials surfaces inside ALCATOR, and developing some of the very first studies of reactor materials at elevated temperatures.”

These efforts, which draw heavily on NSE’s expanded computational modeling capabilities and collaborations with other Institute departments and centers, extend a long history of MIT contributions to international fusion development, including the 15-billion-euro ITER demonstration reactor currently under construction in France. One of the most ambitious technological endeavors in the world, ITER is designed to produce output of 500MW from input of 50MW, and prove fusion power’s feasibility. The ITER reactor chamber will be essentially a scaled-up version of the ALCATOR chamber, including an MIT-developed vertical diverter structure that allows for heat energy extraction (the third of the three basic challenges).

In the big picture, points out Whyte, continued development of nuclear energy as a trustworthy power source is essential to the future of the planet. “We can never make fusion as simple as fission,” he says, “but we have to make it a viable option on the table for mankind. I don’t see any other choice. It might be really hard, but it's worth the effort.”

“We’re basically making energy by creating a star. For power generation, the star has to turn on, and stay on for a year at a time, and we need a way to extract the energy it creates.”