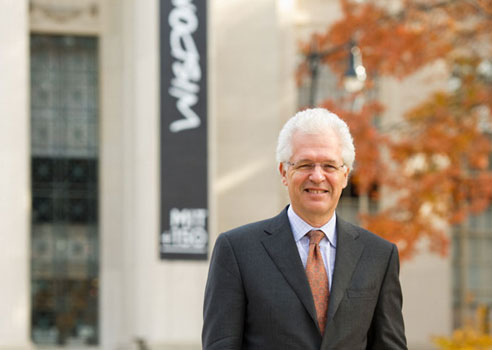 Nuclear technology is inextricably bound up with great issues — energy, international security, climate change, and the environment, to name a few. MIT’s Nuclear Science and Engineering department, as part of a broad re-orientation, has put in place a new strategic plan that will extend its groundbreaking work in nuclear science and the engineering of nuclear systems, while also explicitly tying the department’s education and research to the interactions of nuclear technology with society.

This evolution involves strengthening NSE’s core efforts in areas like advanced simulation and modeling, the development of ‘extreme’ materials, and advanced radiation sources, detectors, and control, while also expanding the department’s boundaries to include additional interdisciplinary work. Partners include MIT’s Departments of Materials Science and Engineering, Mechanical Engineering, Physics, and Political Science, as well as outside organizations like the Institute for Nuclear Power Operations and Harvard’s Kennedy School of Government.

“We’re developing a more integrated view of world-class education in nuclear science and engineering, with a simultaneous focus on Science, Systems, and Society,” explains department head and Japan Steel Industry Professor Richard Lester. “Scientific fundamentals, engineering methods for integrating those fundamentals and technology components into safe, economically competitive nuclear systems, and an understanding of the way these systems interact with society and the environment.

“It grows out of a recognition that effective technical leaders in our field need to understand how the systems we work on interact with society along political, social, economic, and environmental dimensions.”

One example, says Lester, is nuclear security, which has now been added to traditional mainstays nuclear fission and nuclear fusion energy as one of NSE’s primary application domains. “Even the most focused engineer or scientist realizes that there is no technical fix for nuclear security. Certainly there are exciting new technical advances that can help prevent misuse of nuclear materials, but we also need all kinds of other strategies — political, legal, maybe even military — to achieve that goal.”

Lester notes that while members of the NSE community have participated in public debate on nuclear issues since the early days of the civilian nuclear enterprise, this is the first time this role has been a specific departmental priority. “It certainly doesn’t mean we’ll be sounding off on every issue in the media,” he says. “But take a situation like Fukushima, where there really was a lack of solid technical information. People needed that information, they were desperate for a better understanding of what the accident was going to mean for them, and there was a useful role we could play in providing information and, in some cases, interpretation.”

NSE faculty were extensively called upon for public comment during the Fukushima crisis, but the department’s primary communication tool was a student-run blog, which came to be widely cited and praised for its objectivity and depth during a time of confusion. “When we set up the blog, one of the ground rules was that posts should be limited to objective technical information, with no editorializing about whether nuclear power was good or not, or whether countries should go ahead with it,” recalls Lester.

“Apart from anything else, this activity was highly educational for the students. They had to keep asking, what are we doing here, what are the most important issues, how do we convey them to a non-technical audience, how do we maintain our credibility? They had to work these issues out in real time with hundreds of thousands of people reading their work. It really exemplifies what we mean when we talk about Science, Systems and Society.”

At the same time, NSE will strengthen its work on the development of innovative fission and fusion energy systems, which will continue to occupy large numbers of faculty and students. Lester notes that there are several areas of science and engineering, including materials development and high performance computing, where the needs of the two types of energy systems have converged. “We're seeing some of these fundamental developments contribute to applications that in the past have been seen as quite separate — more fission-fusion conversations are taking place,” he says.

The new strategic plan was developed by the NSE faculty during a year-long process that involved extensive consultations with the department’s students, with faculty from across the Institute, with a special panel of industry leaders, and with the NSE Visiting Committee. Other important elements of the plan include increased international engagements, both in energy and security, and an international executive education program that is designed for senior managers and policymakers from the growing number of nations embarking on nuclear power development for the first time. The course’s goal: promoting the safe and responsible use of nuclear energy worldwide by focusing on the policies, strategies, practices and technologies required for a successful nuclear energy program, including coverage of construction, operations, regulation, financing, security, and waste management.

One of the challenges facing the department (and the entire nuclear industry) is a shortage of candidates for senior positions — many outstanding people chose not to enter the nuclear field during the 1980s and 90s, and NSE is in the midst of an ambitious plan to rebuild and expand its faculty. “It’s very competitive,” acknowledges Lester. “The secret, if there is one, is to create an intellectually lively, connected community, one that outstanding people want to be part of. MIT is an incredibly exciting and stimulating place, and nothing could serve better as a recruiting tool.”

"We’re developing a more integrated view of world-class education in nuclear science and engineering, with a simultaneous focus on Science, Systems, and Society."
— Richard K. Lester