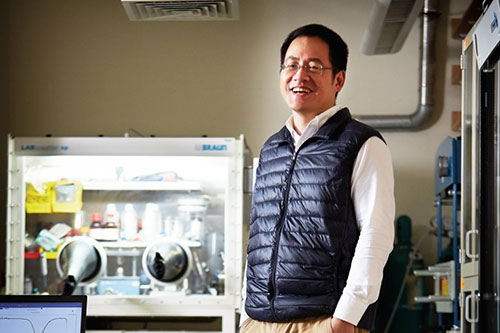 What actually happens to arrangements of atoms as materials perform — and fail — in the real world? With the help of an add-on device he designed for a powerful microscope, Ju Li has created a window into a world where things are inconceivably small and change inconceivably fast.

Li’s device zaps a beam of electrons through ultrathin specimens, allowing him to see materials transform as they undergo strain, are electrified, bombarded with radiation and gases, or immersed in chemicals.

Li, the Battelle Energy Alliance Professor of Nuclear Science and Engineering, believes that illuminating the structural, mechanical, and electrochemical properties of materials at the atomic and nanoscale levels will lead to better nuclear reactors, batteries, superconductors, and safer long-term storage of nuclear waste.

A video of a material used in high-capacity batteries, for instance, shows tiny protrusions flying off conductors submerged in a liquid electrolyte, Li says, “like cherry blossoms in a breeze.” The batteries don’t hold a charge very well, and now Li can see why. “No one witnessed the microscopic mechanism underlying this battery material’s failure before,” says Li, who is also a professor in the Department of Materials Science and Engineering. Building with atoms like LEGO blocks, Li boosted the material’s performance by coating its surface with a one-atom-thick layer of a material impervious to electrons.

Growing up the son of engineers in Sichuan Province in China, Li was drawn to the mysteries of the physical world. A friend who lived in the same apartment block built makeshift radios, microscopes, and model airplanes while Li concentrated on their design. “Even then, I was more involved with the theory part,” he jokes. The friends read a Chinese translation of a cartoon-filled book by nuclear physicist George Gamow that “made a scientific career look incredibly glamorous to both of us,” Li says. The book inspired them to attempt to derive the equations of special relativity. “Nothing seems out of bounds when you are eight or nine,” he says.

Li had collaborated closely with experimentalists but upon returning to MIT, he started to shift from theory and simulation to working with materials in the lab.

“We care a lot about the behavior of materials under extreme conditions such as extreme stress, heavy electrical currents, and aggressive corrosion. Materials in nuclear fission and fusion applications also need to withstand exceptionally high temperatures and exposure to radiation,” he says. With knowledge gleaned from multiscale experiments and modeling, Li and postdoctoral fellow Kangpyo So have fabricated a new class of nanocomposite that is particularly radiation resistant.

Li is now working on the challenges of scaling up the miniscule components of his experimental world to real-world dimensions and time frames. By incorporating insights from the atomic world, he’s confident the new radiation-resistant material, for one, will have a lasting impact.