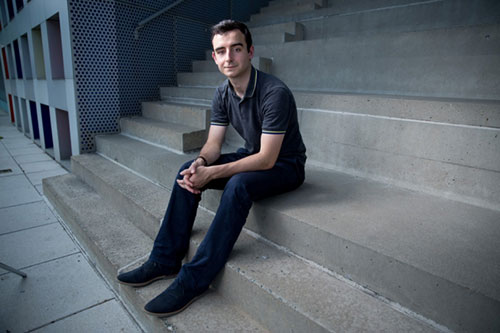 This tenet has been the thread throughout Macdonald’s nearly eight years at MIT — first as an undergraduate, then as a master’s student, and now as a PhD student — all spent studying nuclear science and engineering. Though he has remained engaged in this one department, he’s participated in a variety of projects, first studying reactor design as he pursued his master’s degree and now working on a nuclear weapons verification project in the Laboratory for Nuclear Security and Policy.

Macdonald, who grew up in West London, spent his grade school days equally interested in the arts and humanities and in physics. But he ultimately chose physics when faced with the U.K.’s school system, which requires students to pick a concentration, similar to a major in college. “I still have immense respect for the arts, but I asked myself which would allow me to help people most broadly, and I chose science,” Macdonald says.

His view of energy’s fundamental role in life is deeply rooted in the fact that so much of the world still doesn’t have access to it. Believing in the potential of nuclear energy as a clean, cheap source of power, Macdonald immediately dove into the subject at MIT. And as a master’s student, he worked on designing small, transportable nuclear reactors specialized to run in remote, isolated, and off-grid locations. The possibility of their widespread use invigorated him, but the slow movement from scientific discovery to real-world use frustrated him.

Moving on to the PhD program in MIT’s Department of Nuclear Science and Engineering, Macdonald resolved to find another, more readily applicable outlet for his interest in nuclear science, landing him in a lab that tackles an especially timely issue: how to ensure that countries with nuclear weapons abide by disarmament agreements.

The linchpin of these agreements is being able to verify that the signers are following the rules. But the trick, Macdonald says, is for both sides — or a third party — to be able to police weapons in a way that doesn’t give out too much information about them. If the U.S., for example, were to inspect a Russian weapon, in the process they might also be able to gather valuable information about how it was built — not information that governments want other countries to have.

Macdonald is involved in a project, called Zero Knowledge Warhead Verification, that tackles this problem with a beam of light, a scrambler, and a detector. Objects are made up of nuclei, which each give off a unique glow when hit with a gamma ray; the specific glow of an object acts like a fingerprint to identify what isotopes it’s made of. By carefully repeating this process from multiple angles, a nuclear weapon can be identified based on the composition and distribution of its isotopes.

To provide just enough of this identifying information, but no design information on a weapon, Macdonald says that the weapon is illuminated by the gamma ray beam; the resulting information is then passed on to a scrambler that mixes up the signals before reaching a detector. The resulting signal is then compared with one from a known weapon to see if they match. As both signals are scrambled, the inspector learns nothing useful about either, preserving the owner’s secrets — similar to the idea of “hashing” in digital cryptology.

The project is one year into a five-year-long effort in which Macdonald and his colleagues are also working with Department of Energy labs to design such a verification device. And the lab work, necessarily, is acutely linked with on-the-ground politics.

While Macdonald remains focused on the science end of things, there are policy specialists — advisors and graduate students alike — among the lab members. Their job is to make sure that at the end of the day, the verification device he’s working to develop is not, as he says, “something that doesn’t actually matter, but is just scientifically interesting,” but is rather something that could be used by nations to uphold disarmament agreements.

Though Macdonald remains unsure exactly where his future will take him, he’s sure why he’ll stick with energy, and probably nuclear science: Apart from its role in creating an energy alternative, part of what drew him to nuclear science in the first place was its relative newness as a subject.

“If you think about it, nuclear engineering is really only 50 or 60 years old at this point,” Macdonald says. “That’s really young in the science world, and it leaves a lot of room for discovery.”