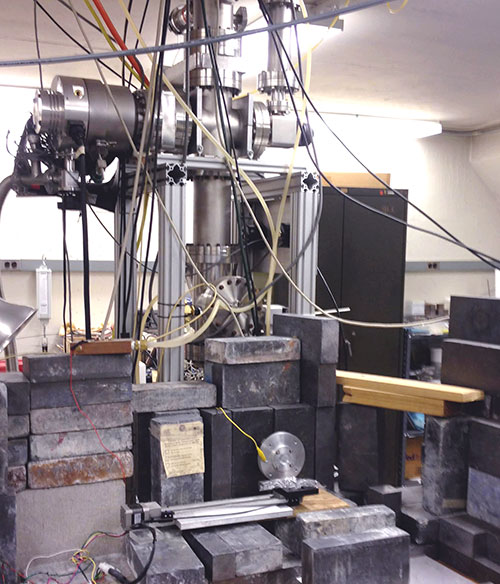 NSE’s Laboratory for Nuclear Security and Policy (LNSP) has received $3.2 million from the National Nuclear Security Administration to support research that could revolutionize the verification of international arms-control treaties.

For nearly four decades, the United States and Russia have worked to reduce the number of nuclear weapons aimed at each other, but without any mechanism to verify that excess warheads were destroyed. The problem is that even rudimentary inspections of nuclear warheads can reveal national-security secrets. Professors R. Scott Kemp and Areg Danagoulian have proposed both an instrument and a protocol that would allow strong verification of warhead dismantlement by foreign inspectors, while at the same time protecting national secrets. The system is a physics manifestation of interactive zero-knowldge proofs, a mathematical concept invented at MIT in the 1980s in which the verity of an assertion can be proved without revealing any underlying information. The proposed instrument uses gamma rays to measure the physical layout of a nuclear warhead and its isotopic composition. The measurement is then declassified through a physical process that does not use electronics or software. The only surviving information is a signature that indicates whether the warhead is authentic or not, but which contains no other information about the warhead.

The new effort is the largest project in the five-year, $25 million Consortium for Verification Technology led by the University of Michigan and funded by the Department of Energy’s National Nuclear Security Administration. The MIT team, headed by NSE’s Richard Lanza, also includes work on big data for nuclear-security applications.

Shafi Goldwasser, the RSA Professor of Electrical Engineering and Computer Science at MIT, and co-leader of the cryptography and information security group at the MIT Computer Science and Artificial Intelligence Laboratory, has joined the LNSP project as a collaborator. Goldwasser discovered zero-knowledge proofs, for which she received the 2012 Turing Award. Asked about the project, Goldwasser said, “This is very exciting for me! I have been waiting thirty years to see the ideas behind interactive and zero-knowledge proofs applied to problems outside the realm of mathematics and digital information.”

The new award builds on a $5 million grant LNSP received last year for a novel method of safely interrogating commercial cargo containers to test for the presence of nuclear materials and nuclear weapons hidden behind dense shielding.

LNSP’s mission is to further international peace and security through creative science. More information is available at lnsp.mit.edu