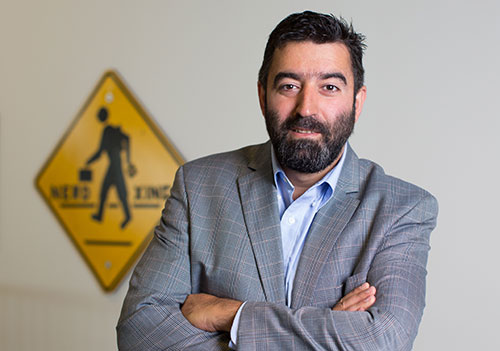 From early in its development, the nuclear community has emphasized the need for a “culture of safety.” Today, with an increasing range of potential nuclear threats, there is growing emphasis on a “culture of security ” — and MIT NSE has augmented its presence in this area by appointing Assistant Professor Areg Danagoulian to contribute to its security-related technology research.

Danagoulian will collaborate with Assistant Professor Scott Kemp, a specialist in nuclear technology policy, and other NSE and Physics faculty and scientists in the newly formed Laboratory for Nuclear Security and Policy, which studies technology-policy interactions in nonproliferation, arms control, materials security, and verification. He will also co-teach class 22.09, Principles of Nuclear Radiation Measurement and Protection and 22.071, Electronics, Signals, and Measurement.

“The great thing about this department is that you have technologists like me working in close multidisciplinary collaborations with policy researchers and information theorists,” says Danagoulian, who earned an SB in Physics from MIT and a PhD in Experimental Nuclear Physics from the University of Illinois. “That’s ultimately what’s needed to solve these problems — policy research driving technological development, and vice versa, technological progress that shapes policy.”

Danagoulian worked as a post-doctoral research associate at Los Alamos National Laboratory before a five-year stint as senior scientist at Passport Systems Inc., a Billerica, Mass., developer of technologies for detecting nuclear weapons and materials hidden inside shielded cargoes.

“It’s a difficult but important task,” he notes. “If an organization has the intellectual capacity to obtain and smuggle a weapon, they’ll know how to shield it.” That’s the driver behind one of Danagoulian’s main research thrusts — a program funded by the Department of Homeland Security that will develop shield-penetrating particle beams for active scanning of freight containers, trucks, and other cargo carriers.

When a beam of “interrogating particles” is sent into the container, “it excites the hidden materials, and triggers processes in fissionable material,” explains Danagoulian. “That generates emissions unique to those materials — fast neutrons, and characteristic gamma rays for isotopes of uranium or plutonium.”

Existing beam technologies are relatively inexpensive, but inefficient because they emit at a wide range of energy levels, only a fraction of which are useful. Danagoulian’s post-doc and student researchers will seek a monochromatic beam source that emits at a fixed energy level. This would make the process faster and more effective, and slash the radiation dose — an important consideration for many reasons, including risk to electronic devices, and to stowaways who sometimes secret themselves in cargo containers.

Related work will explore tunable beam sources that can change the energy of interrogating beams to detect specific isotopes and materials, and new combinations of electronics and light-detecting materials for better detection devices.

“Inspectors would be limited to eyeballing weapons earmarked for elimination,” Danagoulian says. “They can’t look inside, or gather spectral or nuclear data, because the other side doesn’t want them to extract highly secret information, but they need some way of ascertaining that the weapons aren’t fakes.”

The approach being pursued, called ‘zero knowledge detection’, will develop methods of ascertaining authenticity through comparison to a known weapon — creating, in effect, a comparator that can tell whether two devices are identical without revealing anything about them, perhaps through measurement of nuclear resonance fluorescence. There will be heavy student involvement in this research, with participants learning to utilize simulation, build proof-of-concept systems, and conduct data analysis en route to a working system.

Ultimately, notes Danagoulian, verifiable destruction could not only help larger countries, but also provide regional nuclear powers, like India and Pakistan, with incentives to reduce or even eliminate their arsenals.

More broadly, he says, nuclear security is a matter of risk reduction. “We can never bring the risk to zero, but can we reduce it by a factor of 10, or 100? I find it fascinating, and intellectually stimulating — and I really wanted to work on something meaningful, that would improve society and make the world safer for my children.” 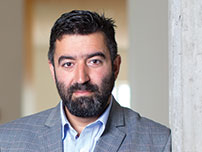