Dennis Whyte, Professor of Nuclear Science and Engineering, began pursuing fusion energy research at MIT in 2006, attracted in large part by the opportunity to work at the Plasma Science and Fusion Center (PSFC). He says it’s “a special place, with a compelling combination of being at the forefront of an important research area like fusion, while being rooted strongly in education.”

As 2015 begins, Whyte is assuming leadership of the PSFC from 20-year veteran Professor of Physics Miklos Porkolab, who is returning to teaching and research. Whyte plans to steer the Center into an era of smaller, faster, and more modular experimentation while maintaining the Center’s educational excellence.

Whyte refers to his assignment as “humbling,” but expresses confidence in the “really amazing” PSFC team and its ability “to build an even more cohesive case for fusion energy going forward.” His extensive NSE/PSFC research contributions include studies of magnetic energy confinement techniques that were honored with the International Atomic Energy Agency’s 2013 Nuclear Fusion Journal Prize.

Founded in 1976, the PSFC has about 200 affiliated faculty members, students, researchers, and technicians from units spanning the Institute, including the departments of Physics, Materials Science and Engineering, and Electrical Engineering and Computer Science as well as NSE. Also on site are several dozen domestic and international collaborators.

While relatively large for a university program, the Center is small by global fusion research standards. “We have impact way above our size,” says Whyte. “By any measure we’ve been extremely successful at creating key breakthroughs across broad areas of fusion — magnetic and inertial confinement, diagnostics, plasma-materials interactions, and superconducting magnet technologies. We plan to continue contributing, while ensuring that education of the next generation of scientists is completely integrated into everything we do.”

Much of PSFC’s work has leveraged the high-field Alcator C-Mod tokamak fusion reactor, one of just three major tokamak facilities in the US. But Whyte says today’s budgetary realities and the changing nature of fusion development require a new strategy.

Whyte’s top near-term priority is evaluation of options that will enable “MIT-quality” experimentation at the scientific frontier, while keeping the Center’s research staff intact and cohesive. One possible example is the Advanced Divertor Experiment (ADX), a facility that would use “a small, purpose-built experiment to address key challenges in the boundary-plasma interface with materials, and controlling and sustaining electric current in plasmas. That’s what MIT should be doing, and the educational mission is built right in,” he explains.

In addition, work in related fields like basic plasma-materials interactions, nuclear detection, and advanced diagnostics will also be nourished, in support of other NSE and Institute-wide efforts, including nuclear security.

Indeed, extending and expanding PSFC’s ties to MIT academics is another priority. “Tying into the breadth of activities at MIT helps makes PSFC unique,” says Whyte. “Nurturing our faculty and our academic roots is part of how we’ll continue to attract the best and brightest students.”

Looking beyond the Institute, Whyte sees opportunities for continued integration with national and international fusion efforts. He cites PSFC Senior Scientist Richard Petrasso’s group as a model — “they’ve developed capabilities to make unique measurements for the National Ignition Facility, and the University of Rochester’s Laboratory for Laser Energetics, two of the largest laser/inertial fusion experiments. There’s heavy student involvement, and they’re a vital part of those national teams.”

Whyte acknowledges that the international ITER fusion reactor project in France is facing challenges, but said the PSFC — a key contributor to date — will continue its support. Simultaneously, he notes, the nimbler experimental approach could enable fusion development on smaller devices like the PSFC’s conceptual ARC reactor. It leverages new high-temperature, high-field superconducting magnet technology and could produce as much power as ITER’s reactor in just one-tenth the volume.

“Smaller and sooner is my mantra,” says Whyte. Disruptive technologies, like the ARC’s superconducting magnets, could create “an extremely exciting pathway that can make fusion happen sooner, while also informing what we do in the near term. We’re advocating for that, and for applying an integrated, multi-disciplinary view of fusion, importantly including nuclear engineering perspectives, to near-term plasma research.

“We should study the parameter space required for magnetic fusion energy: high plasma pressure, high power density, and steady-state. The compact high-field Alcator experiments, and a focused experiment like ADX, show that this approach can be highly effective for advancing fusion science at small size,” he concludes.

While the PSFC will be a different place in five or ten years, Whyte is confident that its special combination of impactful leading-edge research, international collaboration, and strong student involvement will thrive and evolve.

“Tying into the breadth of activities at MIT helps makes PSFC unique. Nurturing our faculty and our academic roots is part of how we’ll continue to attract the best and brightest students.” 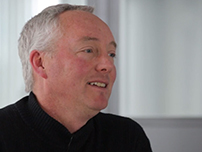