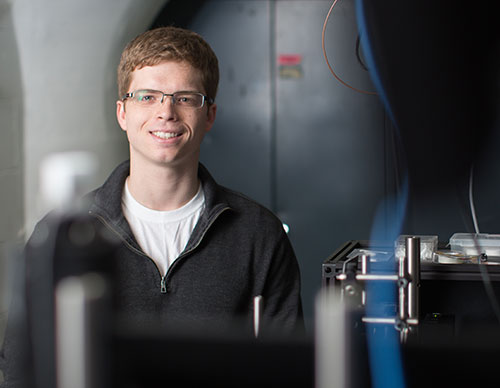 “Highly irradiated components can be a big problem for reactors that have been running for decades because they can lead to mechanical failure,” says Dennett. “If we understand what’s going on microscopically, we might be able to design against it.”

In his work at the Mesoscale Nuclear Materials Laboratory, under the direction of Assistant Professor Michael Short, Dennett is designing techniques to simulate the conditions experienced by structural components inside reactors, and to measure the microscopic defects that emerge in irradiated materials over very short time scales.

Since the first reactors went online more than 60 years ago, scientists have known that radiation can irreparably damage metal alloys used in these components. One specific radiation threat is the formation of voids, an abrupt swelling in the matrix of metallic material that makes it porous and elastically softer.

“These materials can grow macroscopically due to the void effect and come into contact with other components they should not be touching,” says Dennett. The consequences “can lead to failure of the internal components that are expensive to replace

Dennett’s group is using a novel experimental technique for characterizing the damage caused by the ceaseless buffeting of components by neutron emissions. It is called transient grating spectroscopy (TGS), and is an adaptation of a process pioneered by MIT chemistry professor Keith A. Nelson.

Pulsing a laser beam in a pattern, the researchers create acoustic waves on the surface of metallic samples. “It’s like flicking a drum head; we impart energy to the surface and it vibrates,” says Dennett. Then they shine another, continuous laser beam on the same spot where they induced the wave. The acoustic wave deflects the continuous laser beam in a way that can be precisely measured. “The wave and speed at which it propagates are tied to the elastic properties of the material — how stiff or soft it is, or its ability to transport heat,” says Dennett.

Dennett’s immediate goal, and the aim of his dissertation research, is to use TGS to track microscopically, and in real time, changes in metallic materials as they are irradiated. “Our experimental set-up will allow us to concurrently irradiate something with heavy ions or protons and continuously monitor changes in the material properties.”

Dennett says this technique offers immediate improvements on conventional methods for measuring radiation effects, which rely on testing materials after radiation exposure. “There hasn’t been much data available on what the actual mechanical properties of materials are while they are in radioactive environments,” he notes. With TGS, it will be possible to go well beyond “coarse resolution,” he says, and obtain high exposure resolution at very small increments of radiation. This could mean isolating the moment when void swelling begins, which would be a major breakthrough for the field.

Dennett constructed his first experiment a year and a half ago on a 12-foot-long aluminum table equipped with mirrors and lasers. “There was nothing when I first got to the lab, and I was thrown into action,” says Dennett. “But it was exciting to be able to build this from the ground up.”

This kind of experience is nothing new for Dennett. As a freshman at Cornell University, he landed a work study job assisting a staff scientist at the campus synchrotron. “It was amazing to me that just weeks after moving to college from rural Maine, I was sitting on top of a particle accelerator four stories underground, with electrons whizzing around an aluminum tube,” says Dennett. His research involved determining the kinds of materials best suited for coating the electron beam line in the accelerator — “eerily parallel” to his work at MIT, he says.

At Cornell, he was pondering a future in astrophysics until senior year, when he took his first nuclear engineering courses. Interested in “problems of energy generation and the climate crisis,” Dennett was swayed toward a discipline where, he says, “I could do something that might have a more immediate impact than solving fundamental physics problems.”

Today, Dennett’s short-term goal is to generate data “nailing down the transition region when radiation void swelling begins.” If his experiments demonstrate that swelling is due to “a particular kind of defect in the metals exposed to radiation, it might be possible to develop more resistant metal alloys,” he says.

Dennett anticipates completing his doctorate in 2019, with support along the way from a fellowship awarded by the Department of Energy’s National Nuclear Security Administration. But this won’t bring an end to the research. “I am supremely interested in optical detection techniques, and inducing acoustic waves in materials,” he says. “Looking at the applications for these things I can only imagine will be a lifetime interest.”

“I am supremely interested in optical detection techniques, and inducing acoustic waves in materials,” he says. “Looking at the applications for these things I can only imagine will be a lifetime interest.”