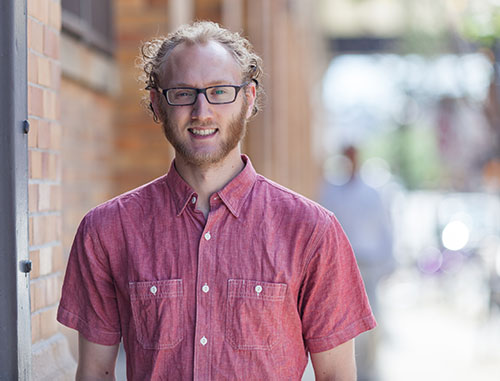 Department of Nuclear Science and Engineering (NSE) graduate student Jayson Vavrek got his start in high-energy particle physics, looking for the smallest forms of matter in the universe. Now at MIT, he uses the same tools and principles to verify nuclear weapons.

The system Vavrek is developing, along with his advisor Areg Danagoulian, Assistant Professor of NSE, is called physical cryptography. It’s designed to precisely identify a nuclear warhead, but without revealing the weapon’s inner-workings. The goal is to allow inspectors to verify that actual nuclear weapons are being marked for disposal during a disarmament process without revealing the weapons’ internal secrets.

The work is being done in MIT’s Laboratory of Nuclear Security and Policy (LNSP), a collection of experts in physics, nuclear engineering, and public policy. “We have great people who I can talk to about anything, from nitty-gritty physics details to the loftier goals of getting this implemented in the political future,” says Vavrek.

As an undergraduate in physics at the University of Alberta in Canada, Vavrek studied particle physics, the kind of work that led to the discovery of the Higgs boson in 2012. But Vavrek also had a chance to work on a more practical project that involved looking for neutrino emissions from nuclear reactors as a way to detect nuclear material. Neutrinos can’t be shielded, says Vavrek, “So they’re an obvious signal.”

He used a detector called a liquid scintillator that detects high-energy charged particles. When neutrinos pass through the detector, their interactions create charged particles as a by-product that can be measured. “I found it interesting because it was using all the same tools as pure particle physics, but in an applied sense,” Vavrek says.

When it came time to apply to graduate school, Vavrek wasn’t sure he wanted to pursue particle physics. Experiments in this field often involve thousands of collaborators. “The chance to contribute something meaningful is really small,” he says.

But when he came across the MIT Nuclear Science and Engineering department, he remembered his project working with neutrinos and thought that this more applied path might be a good fit. “The skills weren’t all that different,” he says.

On day one of his arrival at MIT in 2014, he began work on physical cryptography. The research aims to develop a technology which would enable an inspector overseeing a treaty-driven nuclear weapons dismantlement process to authenticate a weapon with confidence yet still have no access to the classified information about that weapon’s design.  Current arms reduction treaties are hampered by the absence of such technology.

The concept that Jayson is researching involves shooting beams of photons through the weapon, producing a signal that is highly sensitive to the weapon’s makeup. Instead of being measured directly, however, the signal undergoes physical encryption first. The transmitted beam interacts with special materials called encrypting foils that produce a secondary, encrypted signal for detectors to measure.

Different materials create different encryptions, and it is impossible to decode the signal without knowing the composition of the foil materials. As a result, the foils act as virtual “notches” on a cryptographic “key.”

During an inspection, an inspector needs only to determine if the encrypted signal from a weapon undergoing verification matches that from another, previously authenticated weapon.

One of Vavrek’s goals is to determine whether or not it would be possible for a weapon owner to trick the system. A hoax would allow a weapons owner to dismantle fake weapons while claiming that they are compliant with the treaty.

Vavrek has to rely on his own creativity and the expertise of his advisor to simulate potential hoaxes because almost all nuclear weapons specifications are classified. He was able to run simulations using a simplified model of a nuclear weapon from the open literature. He also simulated potential hoaxes involving substitutions and rearrangements of weapons materials in ways intended to produce the same foil as a real weapon. As predicted, his skills from particle physics transferred over seamlessly. “Literally,” he says. “It’s the same simulation software we used in pure particle physics.”

Vavrek is still working on simulations, and he is also working to determine the system’s probability of producing false positives or false negatives or if it could leak information. Within the next year or so, Vavrek hopes to collaborate with the United States National Labs, which have access to weapons grade material.

Looking back on his decision to apply physics to real world problems, Vavrek is satisfied. He’s already published a paper in the Proceedings of the National Academy of Sciences as one of four equally contributing authors. “I’m happy with the contribution I’ve been able to make,” he says.

“We have great people who I can talk to about anything, from nitty-gritty physics details to the loftier goals of getting this implemented in the political future.”