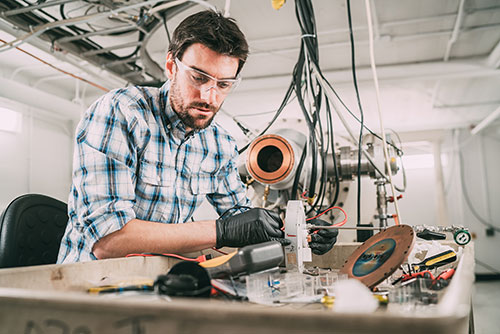 When Brandon Sorbom injured his hip, he did not realize how it would help his future in fusion research.

The Nuclear Science and Engineering (NSE) graduate student, now in his sixth year at MIT’s Plasma Science and Fusion Center (PSFC), is researching how much radiation magnetic materials in fusion tokamaks can endure before they are compromised. He is specifically interested in high-temperature superconductors (HTS), a recently commercialized class of superconductor that could reduce the size and expense of future fusion projects.

It was an injury to his hip as an undergraduate member of the Loyola Marymount University rowing team that provided Sorbom with the time he needed to discover and work on fusion. The injury, serious enough to require surgery, kept him off the crew for nine months. But a combination of savings and an academic scholarship allowed him to stay for a fifth year in college and redeem his lost rowing season.

Given the extra year Sorbom had time to double major in electrical engineering and engineering physics – and to find fusion.

“I was interested in clean energy. In a physics textbook, on literally the last page, they made a reference to fusion, ‘the power source of the future.’ I was intrigued and decided to find out more.”

Fusion, the energy source of the sun and stars, has provided physicists with one of their most challenging pursuits. In nature, huge gravitational forces and high temperatures keep the plasma in stars fusing, burning and producing energy. Replicating this process in a laboratory experiment requires a machine, such as a tokamak, that can produce high magnetic fields to contain the plasma, while heating it to temperatures even higher than the sun.

The more Sorbom read the more excited he became, discovering a hobbyist community online dedicated to building Farnsworth fusors, tabletop experiments capable of producing fusion reactions. He convinced the physics department to underwrite the construction of his own fusor, building and running it over the course of a year and a half, until he graduated.

His experience with the fusor, however, did not prove comprehensive enough to land him in the freshman class of any of the fusion graduate programs he had applied to. But by now Sorbom was hooked on fusion, and his first choice was MIT.

“I had a little money saved, enough to float me for six months. So I packed my bags and flew to Boston. I decided to take an extension class at MIT and knock on doors to find a job in a lab.”

NSE professor Ian Hutchinson’s Electricity and Magnetism class introduced Sorbom to the Plasma Science and Fusion Center, part of MIT’s energy corridor on Albany Street. His year of study, and temp work for the PSFC, provided him with the experience he had lacked, and he entered MIT in 2011 as a graduate student.

Today, Sorbom is an integral part of the PSFC’s fusion program. His current study of the effects of radiation on high temperature superconductors used for fusion research stems from a design class he took from PSFC director and NSE professor Dennis Whyte. The professor challenged the class to use any current technology to design as small a fusion pilot plant as possible, while matching the projected performance of ITER, the large, international fusion project being built in France.

“ITER is a tremendously exciting experiment but has a size problem. If you could somehow shrink that device you could build it faster and cheaper. This would kick us out of the fusion development cycle where we’ve been building bigger and bigger machines. You don’t want to build a demo that is even bigger than ITER because based on our experience with ITER, a larger device would take decades to build.”

Whyte’s class was able to design a smaller, modular fusion reactor that made use of new high-temperature superconducting tape. After the class finished, Sorbom and other classmates fleshed out some of the less-developed ideas in the original presentation, and, with the assistance of Whyte, published a preconceptual design in the journal Fusion Engineering and Design.

The concept, now known as ARC, is in the line of high-field fusion reactor designs the PSFC has long promoted, most recently with the Alcator C-Mod tokamak, which had its record-setting final run in September of this year. ARC is designed to explore all the possibilities of high temperature superconductors in a fusion device.

Sorbom soon proposed research that could help take the ARC concept one step further – or smaller. It would require testing how long the HTS tapes used to control the plasma could survive the radiation created by the fusion process, and discovering how much shielding they would need.

“I started looking around at the lab spaces we have at MIT and I said, ‘Hey, we have a fission reactor, we have accelerators, we have a magnet group: we have all this infrastructure to do a lot of this testing here. So I pitched the idea to Dennis to do this HTS radiation damage testing.’”

Sorbom plans to test the new magnet technology to failure.

“We want to go to as high fluence as we can and push these tapes to their limit. This research is trying to answer the fundamental question of how long the HTS tapes will last under the specific conditions in a compact, modular fusion reactor. This has big implications for how small you can build things and how long you can run a plant.

Sorbom explains that the PSFC has designed the magnet technology in ARC conservatively, based on data collected for ITER. Since ITER is larger, it has much more shielding and not as much radiation at the magnet.

“But we want to get rid of as much shielding between the plasma and magnets as possible to shrink the device. So determining the limits of how much radiation these tapes can take could have potentially far-reaching effects for how reactors are designed.”

Sorbom is excited by how the ARC concept has taken hold of the imagination at the Center.

“Now it’s driving a lot of development within PSFC. It’s really humbling to be part of the project that is leading the path of one of the foremost fusion centers in the world.”

“I was interested in clean energy. In a physics textbook, on literally the last page, they made a reference to fusion, ‘the power source of the future.’ I was intrigued and decided to find out more.”