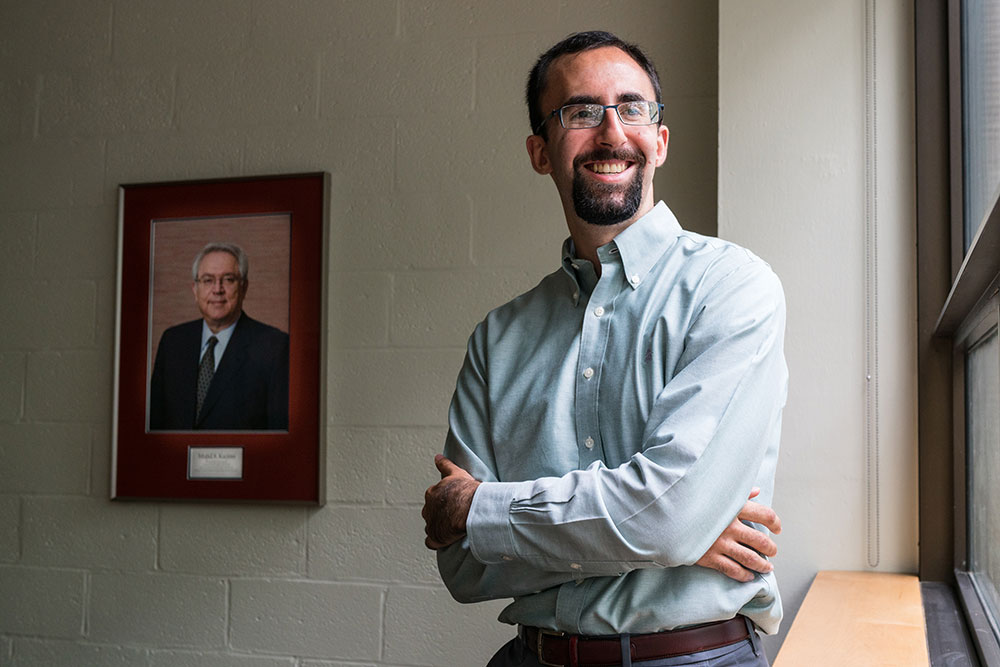 Since 2012, Koroush Shirvan ’10 SM ’12 PhD has served as a research scientist for the Department of Nuclear Engineering and Science (NSE), focusing on fuel use and thermal hydraulics to improve operations in existing nuclear plants. But this summer marked a major transition for him: On July 1, 2017, NSE named Shirvan as an assistant professor.  It’s a change of gears that brings both satisfaction and some uncertainty.

“My main job has been running a research lab, so it’s going to be an adjustment,” says Shirvan. “But I really enjoy teaching and mentoring students, which I’ve been doing since high school.”

For Shirvan, starting a new life is familiar territory. When he was 14, he moved from Iran to Gainesville, FL with his family. Placed in the English as a Second Language program, Shirvan recalls “counting jelly beans” in his first science classes. But he quickly demonstrated a facility for academics that vaulted him to the top of his class. Within a few years, he was attending advanced math courses at the University of Florida, serving as captain of the high school swim team, and then graduating as class valedictorian.

While he started as a triple major (math, physics and mechanical engineering) at the University of Florida, an early encounter altered his trajectory. “I met some Iranian professors of nuclear engineering, who told me that their field was very multidisciplinary,” he says. “Since my interests were so broad, they recommended I take nuclear engineering classes, and apply for some fellowships, which I did.”

In the summer after freshman year, Shirvan landed a paid internship at Southern Nuclear Company, in Birmingham, AL. It was no ordinary ground-floor job. Assigned to work on reactor core design, Shirvan found himself designing novel simulations to help optimize fuel utilization.

“I was able to decipher data that people on site could not, and came up with a new fuel methodology that saved the company millions of dollars,” he says.  Shirvan’s computational models demonstrated that the company could achieve the same power output by adopting fewer fuel assemblies at the next plant refueling.

Following this experience, Shirvan realized that analyzing and improving existing nuclear plants was both a rewarding research interest and a way to address an important industry challenge. “The internship determined my career path,” he says.

Today, even as he takes on new faculty obligations, Shirvan continues to pursue projects that reflect his focus on improving current nuclear technology. One is a multi-year initiative funded by the Department of Energy that seeks to develop computational methods for evaluating accident-tolerant fuels. The goal, says Shirvan, is to create enhancements to fueling systems that will make plants more robust in the face of extreme conditions, such as those encountered during the Fukushima, Japan nuclear incident.

The project, led by Shirvan and TEPCO professor Jacopo Buongiorno, is being conducted under the auspices of MIT’s Center for Advanced Nuclear Energy Systems (CANES), one of the MIT Energy Initiative’s eight Low-Carbon-Energy Centers, which are a vital component of MIT’s Plan for Action on Climate Change. The MIT researchers are collaborating with industry partners and three other universities. The project involves developing, testing, and simulating the performance of coatings on zirconium cladding, and additives to uranium oxide fuel.

The research offers some potentially swift payoffs. “The nice thing about this project is that it has near-term applications,” he says. “It’s been 30 or 40 years since a new fuel has been inserted in a nuclear reactor, and we will be able to test in actual reactors new fuel rods to better inform our designs and simulations.”

Accident-tolerant fuel is eagerly sought by plant operators, Shirvan notes. “Utilities are aggressive about trying new fuel rods because they need to compete with natural gas,” he says. “They are desperate for any solution that could improve the economic performance of their plants.”  With the type of modifications suggested by Shirvan’s project, utilities could achieve these improvements. That’s because accident-tolerant fuel may permit less surveillance and emergency management. “By optimizing the fuel, we can optimize entire power plant systems,” says Shirvan.

Another major research project he is shepherding might also yield performance benefits in working reactors. With MIT’s Nuclear Reactor Laboratory, Shirvan is measuring the impact of radiation on heat transfer capability. “We don’t really have a fundamental understanding of how the radiation environment affects thermal hydraulics,” says Shirvan.

The guidelines for striking the best balance between radiation activity and heat generation have been historically conservative, favoring wide safety margins. “Our results so far show that there might be too much of a safety margin,” says Shirvan. “This means that an operating reactor might be able to increase power outputs without diminishing thermal performance or generating safety problems.”

Shirvan’s approach to his research, and to academic life in general, owe much to his MIT mentor, Mujid S. Kazimi, the former TEPCO Professor of Nuclear Engineering, who died unexpectedly in 2015.  “He would give his students a problem statement, rather than specific guidance,” says Shirvan. “He said first you have to understand what you can and cannot change, and then determine out of the things you can change, which things could provide the largest improvements,” recalls Shirvan.

When Kazimi died, Shirvan inherited some of his ambitious projects, as well as his work philosophy. “I learned from him that you need always to have a calm demeanor when facing problems, that universities should be dictating what industries work on in the future, and that the existing nuclear fleet is the backbone of the future,” says Shirvan.

He is also committed to preparing a new generation of nuclear engineering students for increasingly uncertain times. “Brilliant students come to MIT with the passion of making an impact on climate change through nuclear engineering, only to find that nuclear energy is struggling in the current energy markets,” says Shirvan. “I want students to realize that the advanced technologies we’re working on now are emerging in other countries, and will eventually become a reality here in the U.S., and students need to be ready when this new wave comes in.”