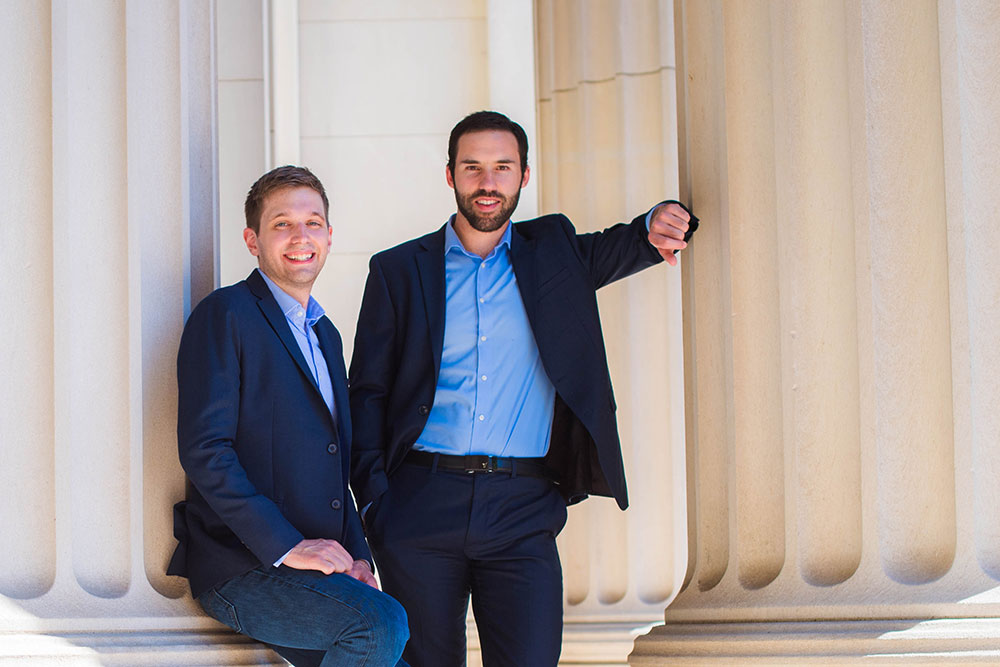 “Sam was one year ahead of me, and as my official buddy during orientation weekend, he took me to the MIT Energy Conference,” recalls Ellis. “That first night, we began sharing ideas about what we wanted to see happen in the nuclear industry.” Adds Shaner, “We were both really interested in the innovative side of the industry and doing something entrepreneurial with nuclear reactor development.”

The connection sparked at the start of their acquaintance is now generating dividends. In June, Yellowstone Energy, the company launched by the duo in 2016 received $2.6 million from the Department of Energy's Advanced Research Projects Agency-Energy (ARPA-E). This was one of just 10 awards distributed by a new ARPA-E program, Modeling-Enhanced Innovations Trailblazing Nuclear Energy Reinvigoration (MEITNER), intended to identify and develop novel technologies to advance safer and more cost-efficient nuclear reactors.

“It was one of our best days, a really big moment for us,” says Ellis. “After working hard on the enabling technology, winning the grant through a selective and rigorous process was a great accomplishment.” It was incredibly gratifying, says Shaner, “to receive such significant validation of the idea we had come up with.”

This idea, the culmination of several years of independent research by Shaner and Ellis, is a design for an advanced, modular nuclear reactor integrating a suite of commonsense but forward-thinking features. Yellowstone Energy’s reactor uses conventional, commercially available uranium dioxide fuel (UO2); operates at near-ambient pressure; and deploys a molten nitrate salt coolant that allows the reactor to reach higher operating temperatures than current water-cooled nuclear reactors. At the heart of this design lies a novel control device—now under patent review, and in the first stages of testing at Oak Ridge National Laboratory.

Yellowstone Energy and its innovative approach was born “out of frustration with the policy, regulatory and supply chain challenges of bringing new technologies to market,”says Shaner. “Just to make a small tweak, such as feeding more highly enriched fuel to current reactors, involves tens of millions of dollars and many years,” he says.

“Sam and I are a good mix of dreamers and pragmatists,” says Ellis. “We realized that a lot of advanced reactor concepts faced hurdles to get to market that went beyond nuclear physics, so we started thinking about how to fix that problem.”

The pair set out to identify a set of reactor properties that would leapfrog the hurdles. “We needed to have a reactor design and technology that would be inexpensive to build and operate, and given the risks in building new reactors, a design that would promise a time- and capital-efficient pathway to market,”says Shaner. “We figured that the more we leveraged proven technology, the easier it would be to license the reactor,” says Ellis.

Their first decision was to use what Shaner calls “off-the-shelf fuel” — UO2, the industry standard. But to increase operating efficiency with this fuel, they would need heat transfer fluids different from those circulating in current generation reactors. Other advanced reactor designs suggested fluoride and chloride salts, but these fluids prove technically challenging to engineer for reliable, commercial-scale systems. That led to another major design decision: to deploy molten nitrate salts, a high temperature, ambient pressure, heat transfer fluid already in widespread use in the chemical and concentrated solar power industries.

“Our challenge then came in bringing together the current fuel and the molten nitrate salt coolant,”says Shaner. As graduate students working in Nuclear Science and Engineering with professors Ben Forget and Kord Smith, Ellis and Shaner had developed expertise in analyzing, modeling and computing the physics of reactor systems. In a matter of months, they had devised a novel control device that would potentially enable their UO2, molten nitrate salt-based reactor to function.

A leg up for entrepreneurs

In the fall of 2016, the team applied for and received a $25 thousand grant from the MIT Sandbox Innovation Fund. With this money, they applied for IP protection on their core, enabling technology. But they also received valuable non-financial assistance.

“MIT is one of the few places where big, ambitious ideas like a nuclear reactor startup are encouraged,” says Ellis. “The entrepreneurial ecosystem at MIT, specifically the mentoring through Sandbox, was a big inflection point for us, allowing us to get off the ground, move on with our idea, and ultimately make it a business.”

Today, the team is based in Knoxville, Tennessee, working under the auspices of a Department of Energy incubator, and preparing a first round of simulations at the Oak Ridge Laboratory, with the help of nuclear industry and utility partners. Their collaboration has weathered well: “Sam and I are very aligned with what we want to do, and the impact we want to make, but we’re always willing to challenge each other to improve our ideas,” says Ellis. “We learned each other's abilities, strengths and quirks during five years together at MIT, which allows us to work really efficiently.”

They've faced their share of challenges. “The hardest part has been the uncertainty, which can make things a roller coaster of emotions,” says Shaner. “For instance, when we finished grad school, we didn't know if we would get funding to continue working on our idea.”

With the endorsement and financial backing of the Department of Energy, they are taking a moment to savor their accomplishment. But they never lose sight of the path before them. “Nuclear has a longer time horizon than most technologies, so we really have to believe in our mission — clean energy and reducing CO2 emissions— in order to get to the finish line,” says Ellis. “If we’re here a decade from now, it will be because people recognize our approach is fundamentally different, that our technology successfully reduced a lot of the risks, and that we can make a major impact in the near term on energy markets.”