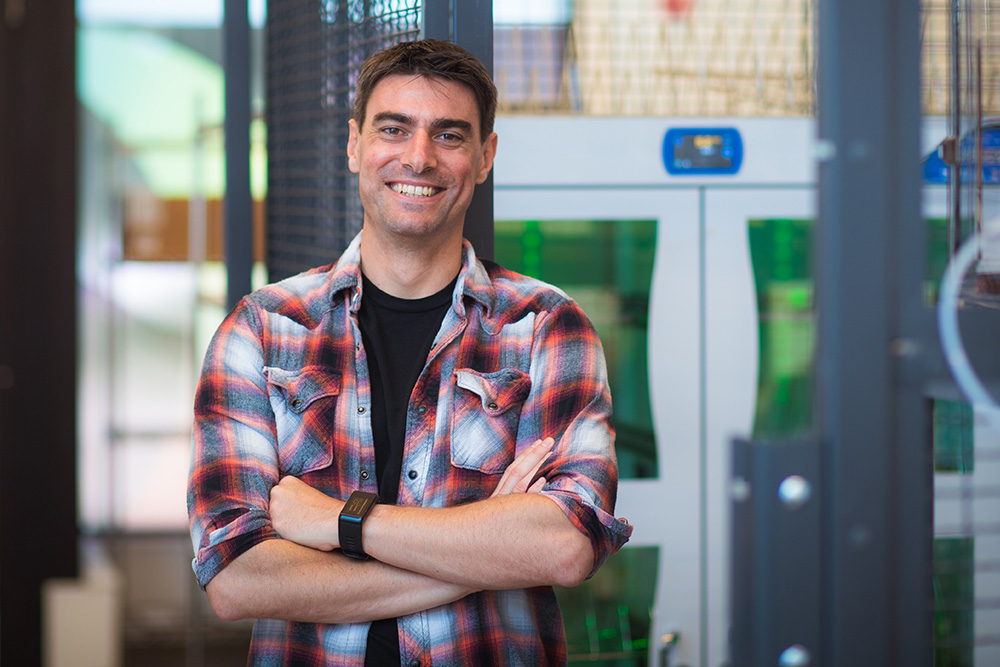 Recent years have seen surging interest in fusion energy as a sustainable, carbon-free source of electricity. Private funding for the tantalizing but long-elusive technology is increasing, and there’s a growing sense of urgency from a generation of young scientists and engineers — including Brandon Sorbom PhD ’17, who is pursuing his goal of fighting climate change in an unusual academic-entrepreneurial role.

CFS aims to achieve that ambitious timeline with a novel business model that combines MIT-affiliated research with commercialization efforts. It leverages technology development begun in 2012 by Sorbom and other MIT Nuclear Science and Engineering (NSE) students and faculty, and support from The Engine, another MIT spinout focused on long-term nurturing of “tough tech” startups.

Undeterred, and eager to develop clean energy technologies to combat climate change, Sorbom saved enough money to come to Cambridge and enroll as a continuing education student in NSE Professor Ian Hutchinson’s Electricity and Magnetism class. The experience resulted in a recommendation from Hutchinson, a research job at PSFC under NSE Professor Dennis Whyte, and Sorbom’s admission to NSE’s doctoral program.

A seminal moment came in Whyte’s 2012 Principles of Fusion Engineering class (22.63). Sorbom and his classmates took up Whyte’s challenge to leverage new superconducting magnet technology and create a novel compact tokamak power plant design that would enable faster and less-expensive exploration and development.

The resulting work ran counter to the trend of ever-larger and more-costly fusion research facilities, but was so promising that a small group, including Sorbom, continued the effort and published (with Whyte) a journal article outlining what came to be known as the ARC concept.

MIT’s fusion program was in transition at the time. Federal funding cuts were impacting the PSFC’s pioneering Alcator C-mod research tokamak, which was eventually shut down. But Whyte (who became PSFC’s director in 2014) was advancing his advocacy for smaller, more modular modes of experimentation that could make fusion energy practical in time to help alleviate climate change.

“Dennis took PSFC in a new direction and was great about allowing the young guns to suggest crazy ideas while keeping things from going off the rails,” says Sorbom. “In the summer of 2015, some of us went to a fusion engineering conference in Austin, Texas, and the idea for SPARC germinated one night when we were eating barbecue and sketching things on napkins.”

The tokamak-based SPARC design seeks the shortest possible path to a fusion device that produces more energy than it consumes, a long-sought milestone in fusion development. In 2016, Sorbom and fellow students Bob Mumgaard (a TA in the design class who led the effort to found CFS and now serves as its CEO), Zach Hartwig (also a TA, and now an NSE professor) and Dan Brunner (now CFS’s chief technology officer) made the case for its development to Whyte and PSFC Deputy Director Martin Greenwald, who signed on to the idea.

The team also wanted the shortest possible path to putting fusion power on the grid. After studying many possible business models, they decided not to seek government grants, but instead pursue a novel combination of ongoing PSFC-linked research with formation of a for-profit startup. The group was able to arrange $50 million in initial funding from Italian energy supplier Eni in 2018, and later Series A venture funding of $115 million, with some of that money flowing back into PSFC research efforts. CFS is also supported by The Engine, which offered planning assistance and continues to provide office and lab space and other services for CFS (and over a dozen other startups).

Today, explains Sorbom, “MIT employees can come to The Engine and work with us, and many technical people at CFS are visiting scientists at MIT. It was tricky to set up, because it’s the first time MIT has done something like this on a large scale, but we figured out the legal framework and so far it’s worked out great. People don’t wear different hats – whoever pays their salary, we’re all on the SPARC team. The business model is almost as exciting as the technology, and I hope it can be copied for other efforts to bridge the gap between academia and industry.”

Much of Sorbom’s time is spent working with organizations in the high-temperature superconductor supply chain, to help develop the production volumes, quality levels, and price points needed for SPARC, which is on track for the 2025 demonstration. “But a lot of my research is literally the same as when I was a grad student,” he notes.

“The biggest thing,” concludes Sorbom, “is how awesome this team is, and how great the MIT-CFS partnership is going. The MIT connection is extremely valuable; it gives instant credibility. And there are a ton of people involved who, frankly, took pretty big risks in helping set this up. Like us they took a risk and the rewards to date have been really good.”