3 Questions: Areg Danagoulian on a new arms control tool and the future of nuclear security 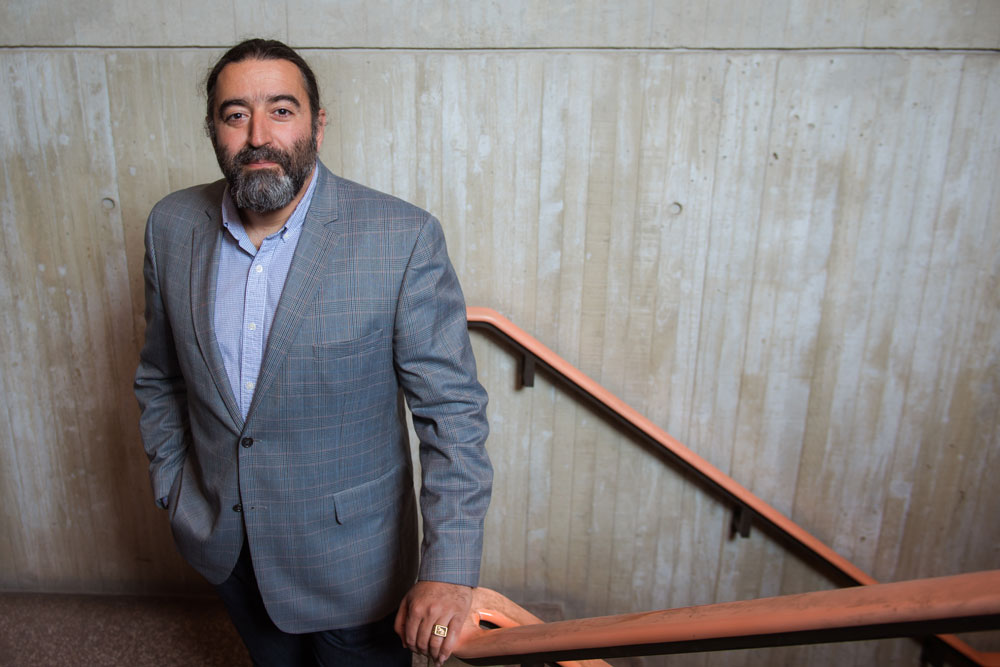 Areg Danagoulian, associate professor in the MIT Department of Nuclear Science and Engineering, has built a career around nuclear detection technology. His work has focused, among other things, on a system that could greatly improve the current process for verifying compliance of nuclear warheads.

Earlier this year, he published new work on physical cryptographic nuclear warhead verification and on active detection of shielded nuclear materials in journals including Nature Communications and the Proceedings of the National Academy of Science. He has also received a pair of prestigious accolades: a radiation science and technology award from the American Nuclear Society and the honor of being named, along with his team, as the 2019 Arms Control Association (ACA) Arms Control Persons of the Year. “This innovation paves the way for more effective arms control agreements, inspections, and enforcement," said Daryl Kimball, executive director of the ACA. "Professor Danagoulian’s MIT team has brought the best science to arms control and provided a creative solution that can reduce nuclear threats and enhance security.”

In a recent conversation, Danagoulian spoke about his work and its impact on the future of international security.

Q: What is the new approach to nuclear warhead verification you and your team have developed?

A: Up to now there have been no ways to verify warheads, or to verify dismantlement of warheads. For security reasons, nuclear powers don’t let inspectors get close to their warheads, and the conventional method for offering proof of dismantlement relies on destroying weapons delivery systems — cutting wings off B-52 bombers, for example. Our approach uses neutron resonance transmission spectroscopy to capture a unique fingerprint of the relevant isotopes in a nuclear weapon as well as its geometry. This method involves bombarding a warhead with a neutron beam, which is modulated by the warhead’s isotopic and geometric makeup. After exiting the warhead, the beam is scrambled by an encrypting filter and is then captured by a neutron detector. Each warhead has a specific profile, so arms inspectors can use information from our detector to verify that fissile material from a dismantled weapon truly matches a previously authenticated, “golden copy” object. The physical encryption means verification can be accomplished without revealing the engineering particulars of a warhead component, and in a manner that prevents computer hacking or other kinds of manipulation.

Q: What sets this method of verification apart from other approaches?

A: We came up with something that is very hard to cheat, which is the Holy Grail for people pursuing authentication. Even where there are disarmament treaties, there is an incentive to cheat and maintain an advantage. Without the capacity to determine whether the other side’s warhead is real, or if its warhead has actually been dismantled, a nation might well view a current or future treaty as toothless.

Efforts in the area of authentication go back a number of decades. Early work involved collaboration on technology between national labs here and the Russians, in the days when they were happy to work and socialize together. Their methods relied on computers to protect sensitive information, which meant the whole verification process was vulnerable to hacking. In the past decade or so, there have been efforts to make this digital information more secure, so that a host country could not, for instance, sneak in some information that looked like a weapon for the inspectors to count.

But we wanted to think of a different and better approach. And not just us: Teams in academia and national labs too have been working on concepts of physical cryptography. Groups at Princeton, Los Alamos, Sandia, Oak Ridge, and elsewhere have made significant advances. After much iteration on our idea, including extensive computer simulations and experimental testing, we’ve shown that our techniques are both very hoax proof and very secure. And what we’ve been developing is quite a bit more practical than the systems proposed by other groups. Our technology is simpler, and doesn’t require millions of dollars in equipment. In fact, we’re trying to build an effective experimental apparatus that can fit in a small laboratory and will cost around $100,000. It won't be easy, but we are working on feasibility studies now with colleagues at Princeton University.

Q: By lowering technological barriers for verification, might your research help strengthen current nuclear treaties, or even spark new treaties?

A: We have to approach this with humility. I tell everyone that we can produce the best technology out there but without the political will, it won’t go anywhere. I don’t think that just by providing them with the technical means we will be able to force or convince politicians to surrender their reservations. This is the barrier to overcome.

Take the Comprehensive Test Ban Treaty, which the U.S. signed but never ratified. One of the excuses for not ratifying was that Russians could cheat the verification system. In the early 90s, the Russians really had little interest in building up their arms program; they were preoccupied about putting bread on the table. But even though cheating the verification protocols was very unlikely, it was technically possible. Opponents of the treaty exploited that fact, among others, to derail ratification.

For the future, we have to put in place solutions that are both political and technological, and make it harder for opponents to amass talking points against new treaties. In the meantime, my team continues to work on ways to make our authentication system even better and more practical. We are exploring a new type of physical cryptography using electricity that will render it truly resistant to information leaks. This is a tangible step in advancing technology that could make possible more ambitious and far-reaching arms control treaties down the road. My hope is modest: to put the seeds of thoughts of what is possible into the heads of policy experts and policymakers so when there is a thaw in relations, a new spring, the seeds will germinate and we will have real results.