Atomic design for a carbon-free planet 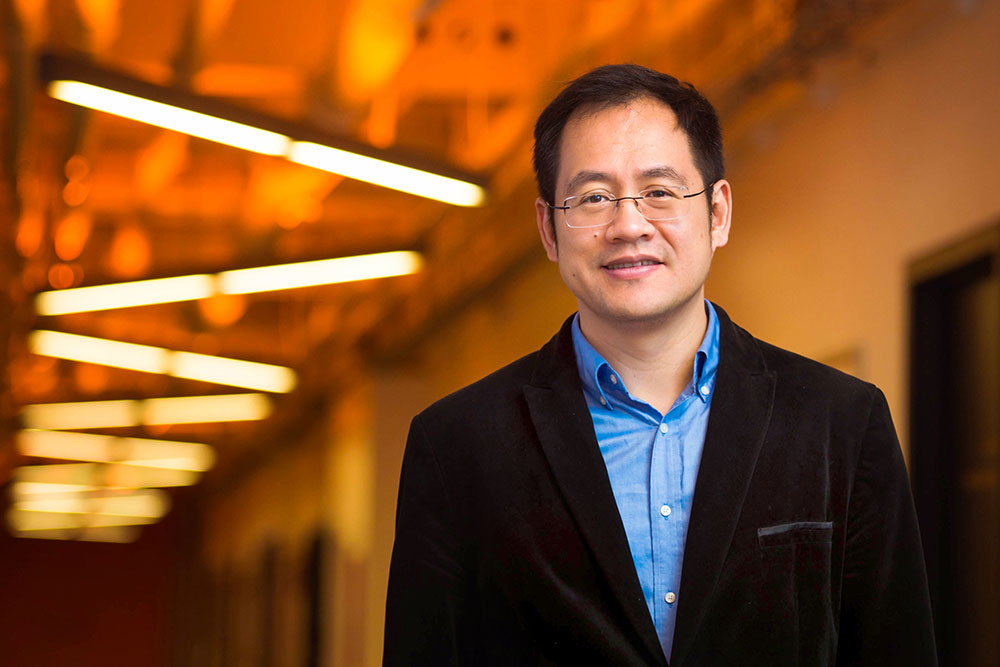 For much of his career, Ju Li PhD ’00 thrived on the theoretical aspects of his work, which investigated how manipulating and restructuring materials at the atomic scale could yield surprising and useful new macroscale properties. This research, which he began in 1994 as a graduate student at MIT, was situated at “the interface between the known and unknown,” says Li, Battelle Energy Alliance Professor of Nuclear Science and Engineering and Professor of Materials Science and Engineering. “There was a kind of uncertainty in doing research that was very attractive to me, almost addictive.”

Li’s work modeling the positions of atoms “the way Newton tracked trajectories of planets,” he says, was a form of deep play: “The science was fascinating, and I was having a lot of fun doing simulations about electrons, atoms and defects,” he says.

But beginning in 2011, after he returned to MIT as a faculty member, Li began questioning his goals. “As one gets older, just doing theory and talking about science is not enough,” he says. “I had known since the late 1990s that climate change was a problem, and I came to realize there was a lot I could and should do personally to contribute.”

Li recognized that his years of microstructural material simulations provided a robust platform for exploring energy solutions to help address climate change. He launched an experimental program in his lab, and, he says, “I became more engineering focused.”

The result: a gusher of advances in materials with applications in nuclear energy, batteries, and energy conversion, with significant near- and long-term implications for decarbonizing the planet. The breadth of his work, captured in hundreds of journal articles — 45 in 2020 alone — has earned Li recognition, including election to the Materials Research Society, the American Physical Society, and just in November 2020, election as a fellow to the American Association for the Advancement of Science.

But what drives all this productivity “is feeling the pressure of time,” says Li who has launched what amounts to an ambitious campaign “to help save earth, essentially.”

As a way of organizing his own burgeoning energy research portfolio, and establishing a model for the larger research community, Li has embraced a two-part, “A+B” approach:

“‘A’ is for action, which means rapidly scaling up proven technologies such as nuclear power and battery energy storage that we know can work at the terawatt scale required to reduce CO2 emissions drastically before mid-century,” says Li. “‘B’ is for baby technologies, like advanced fission and fusion reactors, and quantum computing, new technologies that we must nurture today so that they are ready in 20 to 30 years.”

Earth is catching fire, Li believes, and it’s important to direct the full force of scalable technologies at the conflagration right now. “You put out the fire by 2050, slow down the slope of CO2 and temperature rise, then bring in cleaner, more advanced energy systems to scale,” he says.

To underscore his commitment to this approach, Li last year launched the Applied Energy Symposium: MIT A+B showcasing the most promising materials and technologies for immediate and future energy impacts.

Li’s own A+B research draws on his deep expertise in materials theory, modeling and microstructural science. For more than a decade, he has been investigating innovative applications for elastic strain engineering, a technique that puts huge tensile and shear mechanical stresses on the lattice-like atomic structure of certain materials in order to generate novel optical, electrical, thermal, catalytic and other properties. This approach first emerged in the 1990s, when researchers strained silicon crystal lattice 1% beyond its original state, permitting electrons to travel faster through the material and setting the stage for better lasers and transistors.

Li’s group has broken past previous elastic strain limits, unleashing more potential in materials. Among other accomplishments, his team can strain silicon beyond 10% and diamond beyond 7%, paving the way for much faster semiconductors. They have developed better catalysts for hydrogen fuel cells, and for the energy conversions required to turn the electricity from solar, wind and nuclear energy into chemical fuels that can be stored. Li’s team has also demonstrated strain-engineered superconductors. “These strained metallic conductors could significantly improve superconducting magnets, as well as efficient, long-range power transmission,” he says.

In another application of strain engineering, Li and his collaborators were able to stretch micron-sized, uniformly shaped structures out of industrial diamond material, deploying microfabricated grippers triggered by microelectromechanical systems. These structures, which Li calls microbridges, have unique electrical properties and can be massively replicated. “We can put gazillions of these microbridges onto wafers, and each of these bridges can host thousands of transistors,” Li says. “We hope they could prove useful in power electronics for solar photovoltaics.”

This work in nanocircuitry is part of Li’s broader efforts in advanced computing, which incorporate a range of engineering techniques. For instance, his lab has learned how to manipulate single atoms with great precision, employing highly focused electron beams. “We can dribble and shoot the atom, like a soccer ball, controlling its direction and energy,” says Li. It is research he hopes will advance quantum information processing, boosting many domains of engineering including A+B technologies.

In parallel to this advanced computing work, Li is forging ahead with critical energy applications, aided by in situ transmission electron microscopy, machine learning, and electronic structure modeling, One current project: designing safe and powerful all-solid-state batteries, using honeycomb-shaped nanostructures that are stable while in contact with highly corrosive lithium metal.

In the nuclear energy arena, Li is developing robust, carbon-nanotube and nanowire strengthened metallic nanocomposite materials that can survive high-dose radiation and high temperature; 3D printing of refractory alloys; and materials crafted from ceramic-zirconium crystal that could serve as a thermal superinsulator, taking heat up to 1400ºC. He is also crafting processes for removing radioactive gases and liquids in treating spent nuclear fuels, in an attempt to “fully close the nuclear fuel cycle,” says Li.

To top off this flood of research, Li is co-directing the MIT Energy Initiative’s Low-Carbon Energy Center for Materials in Energy and Extreme Environments, with NSE professor Bilge Yildiz.

From theory to device

As the child of two engineers who built nuclear power plants in China, Li always felt comfortable with nuclear energy and other sophisticated energy technologies. But he loved computer programming and theoretical physics, and never viewed himself as an engineer.

It was through his MIT mentor, (now emeritus) professor Sidney Yip, who spanned the fields of material science and nuclear science, that Li first glimpsed the nearly unlimited potential of working with materials. “This totally shaped me as a scientist,” he says. “I found out both how ignorant I was, and how interdisciplinary research could be.”

After nine years away from MIT “learning the ropes” in other universities, Li had the tools in hand, and new resolve, to start “coming up with more and more relevant material solutions to climate change problems,” he says. “Going from computer simulations all the way to actual devices is now what I love to do.”

With three children, Li finds himself increasingly preoccupied by the urgency of his mission. “I would like to see some of my discoveries and inventions being exponentially replicated, really used by people,” he says. “My dream is to see us carbon free, and improving lives around the globe.”