Toward a more secure world 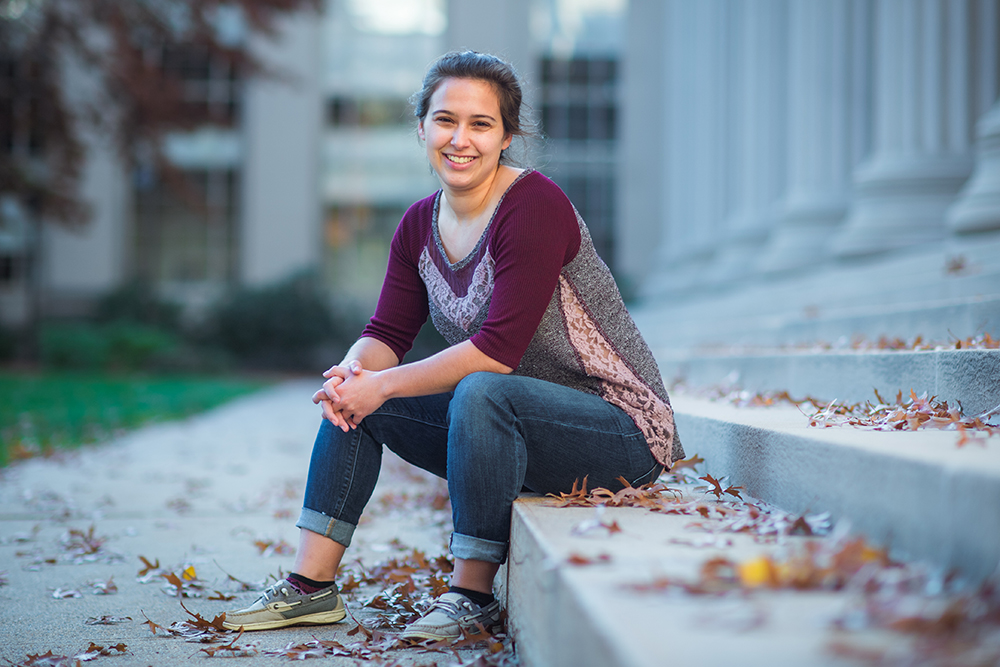 Well before arriving on campus, Peninah (Nina) Levine knew what she wanted from her undergraduate education:

“I came to MIT to be in an environment that would push me beyond my comfortable limits,” says Levine, a senior majoring in nuclear science and engineering (NSE). “I had to find where my passions lay and forge my own path.”

Today, Levine is well along that path, engaged in a five-year combined undergraduate and master’s program and helping develop technologies for characterizing nuclear material—tools to aid in nuclear weapons verification or to prevent illicit trafficking of nuclear material. Her research is based in the Laboratory for Applied Nuclear Physics, directed by associate professor Areg Danagoulian ’99.

“I was looking for a research opportunity with tangible applications, and that’s what I found at the lab,” she says. “The work we’re doing has clear implications for making the world safer.”

Levine is focused on a process called neutron resonance transmission analysis (NRTA), which is used for identifying specific kinds of special nuclear materials. Elements come in different forms, or isotopes, and one way to differentiate among isotopes is to bombard them with neutrons.

“Passing a neutron beam through a target material and detecting what comes out the other side — what the target does and does not absorb — enables us to analyze and precisely determine isotopic composition,”  says Levine.

This highly reliable method for pinning down the nature of nuclear materials is crucial in nuclear security, where verification of weapons treaties may depend on establishing if a warhead slated for elimination is real or fake. The same kind of technology is useful for determining the enrichment status of nuclear fuel, or for revealing the presence of concealed radioactive material.

In spring 2020, Levine jumped into her part of the project: devising simulations of three different methods for generating neutron beams that might satisfy the requirements for an optimized version of NRTA.  Getting these models right means avoiding costly mistakes at the experimental stage.

Due to the pandemic, Levine conducted her research from home in Bedford, New Hampshire. “I never had the opportunity to meet people in my lab in person, and I missed the community aspect,” she says.  Nevertheless, she found taking on her lab responsibilities both stimulating and rewarding.

“I’ve had to make myself familiar with all parts of these systems — learning about what kind of energies are required for the neutron beams, and what kind of materials to choose as targets,” she says. “Breaking down a problem into smaller pieces is cool and fascinating to me.” Levine will be incorporating this research into her master’s thesis.

A series of pivotal experiences led Levine to her current concentration in nuclear security. One occurred during MIT’s Freshman Preorientation (FPOP).

“At the NSE FPOP, I heard Professor (R. Scott) Kemp speak about warhead verification,” she says. “I had been interested in nuclear energy in high school, but this got me thinking about security applications of nuclear.”  As a freshman, Levine then took 22.04 (Social Problems of Nuclear Energy), with Kemp. “The class showed how people’s fear of nuclear energy created all these limits on regulatory policy,” she says. “But I find that areas where science doesn’t always agree with policy are quite interesting; I want to know why those tensions occur.”

Levine declared Course 22, but wasn’t confident of her decision until she took 22.061 (Fusion Energy). “The faculty and students were so optimistic, talking about how fusion could make the world a better place,” recalls Levine. “This class really attached me to the department, and I was certain this was an area and a community I could see myself in.”

But Levine’s internship at Lawrence Livermore National Laboratory the summer after her sophomore year proved key. “I was analyzing recently declassified films of old atmospheric nuclear tests, to learn how much radioactive dust and dirt was caught in the rising cloud and where it ended up,” she says. “We wanted to create maps that could help first responders or residents in case of a nuclear attack or explosion.”

Engaging in research with real-world impacts catalyzed Levine. “Being in the national lab community was where I committed to nuclear,” she says. “It made me want to get my master’s and continue with this work.”

At MIT for her senior year, Levine is continuing to refine her simulations, while completing coursework not just for NSE, but for her minor in public policy. “I want to take my security and technology focus and fit it into the larger social arena,” she says.

Levine had been looking forward to diving back into one other activity upon her return to campus: co-directing the extracurricular group Amphibious Achievement. This athletic and academic mentorship program for 50 Greater Boston high school students is another casualty of Covid restrictions, to Levine’s frustration.

“Amphibious Achievement was the perfect combination of tutoring, mentoring, and athletics, which I found so important in my own development as a student, and it’s quite tough now, not being able to help out these high schoolers,” says Levine, a former MIT varsity swim team member.

When she finds a moment in her schedule these days, Levine engages in her favorite pastime of creative writing. “Ever since I was very young, I’ve loved writing, especially science fiction,” she says. “It’s a way of exploring other worlds.”  In the past year, she’s managed to crank out the first draft of a dystopian novel that explores the social implications of genetically engineering a new species.

But as much as she enjoys spinning out fantasies, she has set herself practical and ambitious goals. When she leaves MIT in 2022, she plans to commission with the U.S. Navy as an officer on a nuclear submarine. “I’m not from a military family, but at Lawrence Livermore, I met people with firsthand knowledge of nuclear security applications, and realized that might offer cool opportunities I wouldn’t find elsewhere,” she says. And after her five-year naval commission ends, Levine says she’d “like to be working in a security or foreign relations position, making the world more secure.”