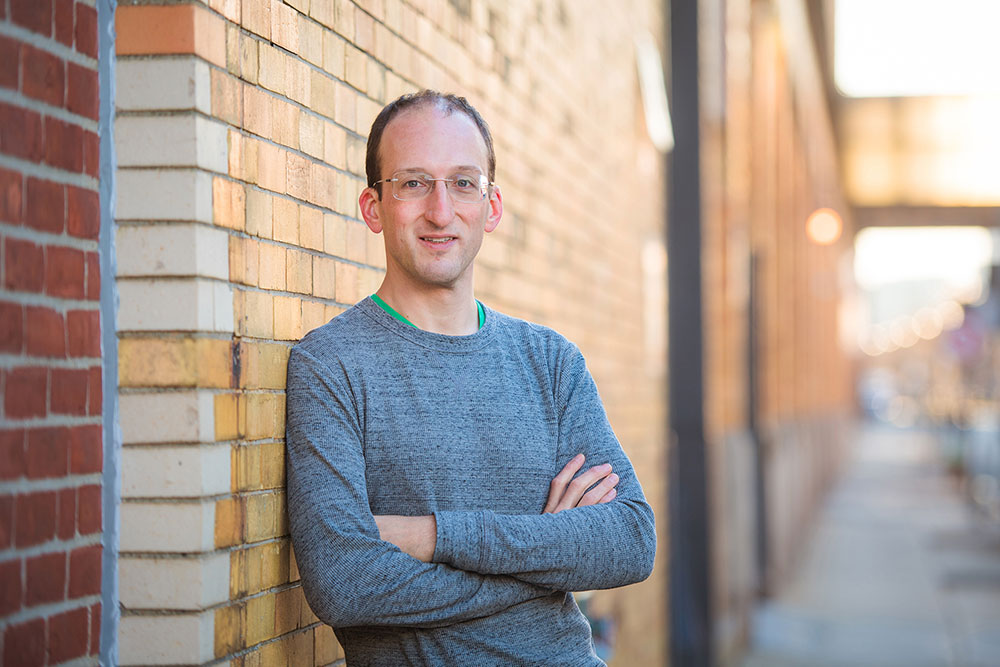 A longstanding interest in radiation’s effects on metals has drawn Michael Short into new areas such as nuclear security and microreactors.

Michael Short came to MIT in the fall of 2001 as an 18-year-old first-year who grew up in Boston’s North Shore. He immediately felt at home, so much so that he’s never really left. It’s not that Short has no interest in exploring the world beyond the confines of the Institute, as he is an energetic and venturesome fellow. It’s just that almost everything he hopes to achieve in his scientific career can, in his opinion, be best pursued at this university.

Last year — after collecting four MIT degrees and joining the faculty of the Department of Nuclear Science and Engineering (NSE) in 2013 — he was promoted to the status of tenured associate professor.

Short’s enthusiasm for MIT began early in high school when he attended weekend programs that were mainly taught by undergraduates. “It was a program filled with my kind of people,” he recalls. “My high school was very good, but this was at a different level — at the level I was seeking and hoping to achieve. I felt more at home here than I did in my hometown, and the Saturdays at MIT were the highlight of my week.” He loved his four-year experience as an MIT undergraduate, including the research he carried out in the Uhlig Corrosion Laboratory, and he wasn’t ready for it to end.

After graduating in 2005 with two BS degrees (one in NSE and another in materials science and engineering), he took on some computer programming jobs and worked half time in the Uhlig lab under the supervision of Ronald Ballinger, a professor in both NSE and the Department of Materials Science and Engineering. Short soon realized that computer programming was not for him, and he started graduate studies with Ballinger as his advisor, earning a master’s and a PhD in nuclear science and engineering in 2010.

Even as an undergraduate, Short was convinced that nuclear power was essential to our nation’s (and the world’s) energy future, especially in light of the urgent need to move toward carbon-free sources of power. During his first year, he was told by Ballinger that the main challenge confronting nuclear power was to find materials, and metals in particular, that could last long enough in the face of radiation and the chemically destructive effects of corrosion.

Those words, persuasively stated, led him to his double major.  “Materials and radiation damage have been at the core of my research ever since,” Short says. “Remarkably, the stuff I started studying in my first year of college is what I do today, though I’ve extended this work in many directions.”

Corrosion has proven to be an unexpectedly rich subject. “The traditional view is to expose metals to various things and see what happens — ‘cook and look,’ as it’s called,” he says. “A lot of folks view it that way, but it’s actually much more complex. In fact, some members of our own faculty don’t want to touch corrosion because it’s too complicated, too dirty. But that’s what I like about it.”

In a 2020 paper published in Nature Communications, Short, his student Weiyue Zhou, and other colleagues made a surprising discovery. “Most people think radiation is bad and makes everything worse, but that’s not always the case,” Short maintains. His team found a specific set of conditions under which a metal (a nickel-chromium alloy) performs better when it is irradiated while undergoing corrosion in a molten salt mixture. Their finding is relevant, he adds, “because these are the conditions under which people are hoping to run the next generation of nuclear reactors.” Leading candidates for alternatives to today’s water-cooled reactors are molten salt and liquid metal (specifically liquid lead and sodium) cooled reactors. To this end, Short and his colleagues are currently carrying out similar experiments involving the irradiation of metal alloys immersed in liquid lead.

Meanwhile, Short has pursued another multiyear project, trying to devise a new standard to serve as “a measurable unit of radiation damage.” In fact, these were the very words he wrote on his research statement when applying for his first faculty position at MIT, although he admits that he didn’t know then how to realize that goal. But the effort is finally paying off, as Short and his collaborators are about to submit their first big paper on the topic. He’s found that you can’t reduce radiation damage to a single number, which is what people have tried to do in the past, because that’s too simple. Instead, their new standard relates to the density of defects — the number of radiation-induced defects (or unintentional changes to the lattice structure) per unit volume for a given material.

“Our approach is based on a theory that everyone agrees on — that defects have energy,” Short explains. However, many people told him and his team that the amount of energy stored within those defects would be too small to measure. But that just spurred them to try harder, making measurements at the microjoule level, at the very limits of detection.

Short is convinced that their new standard will become “universally useful, but it will take years of testing on many, many materials followed by more years of convincing people using the classic method: Repeat, repeat, repeat, making sure that each time you get the same result. It’s the unglamorous side of science, but that’s the side that really matters.”

The approach has already led Short, in collaboration with NSE proliferation expert Scott Kemp, into the field of nuclear security. Equipped with new insights into the signatures left behind by radiation damage, students co-supervised by Kemp and Short have devised methods for determining how much fissionable material has passed through a uranium enrichment facility, for example, by scrutinizing the materials exposed to these radioactive substances. “I never thought my preliminary work on corrosion experiments as an undergraduate would lead to this,” Short says.

He has also turned his attention to “microreactors” — nuclear reactors with power ratings as small as a single megawatt, as compared to the 1,000-megawatt behemoths of today. Flexibility in the size of future power plants is essential to the economic viability of nuclear power, he insists, “because nobody wants to pay $10 billion for a reactor now, and I don’t blame them.”

But the proposed microreactors, he says, “pose new material challenges that I want to solve. It comes down to cramming more material into a smaller volume, and we don’t have a lot of knowledge about how materials perform at such high densities.” Short is currently conducting experiments with the Idaho National Laboratory, irradiating possible microreactor materials to see how they change using a laser technique, transient grating spectroscopy (TGS), which his MIT group has had a big hand in advancing.

It’s been an exhilarating 20 years at MIT for Short, and he has even more ambitious goals for the next 20 years. “I’d like to be one of those who came up with a way to verify the Iran nuclear deal and thereby helped clamp down on nuclear proliferation worldwide,” he says. “I’d like to choose the materials for our first power-generating nuclear fusion reactors. And I’d like to have influenced perhaps 50 to 100 former students who chose to stay in science because they truly enjoy it.

“I see my job as creating scientists, not science,” he says, “though science is, of course, a convenient byproduct.”