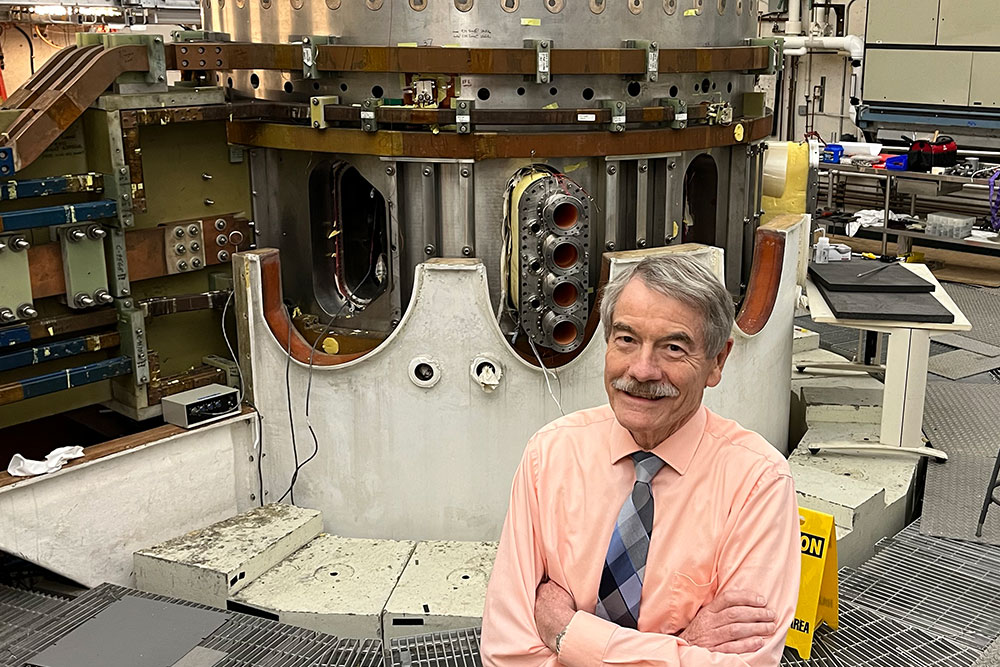 Ordinary folks gazing at the night sky can readily spot Earth’s close neighbors and the light of distant stars. But when Ian Hutchinson scans the cosmos, he takes in a great deal more. There is, for instance, the constant rush of plasma — highly charged ionized gases — from the sun. As this plasma flows by solid bodies such as the moon, it interacts with them electromagnetically, sometimes generating a phenomenon called an electron hole — a perturbation in the gaseous solar tide that forms a solitary, long-lived wave. Hutchinson, a professor in the Department of Nuclear Science and Engineering (NSE), knows they exist because he found a way to measure them.

“When I look up at the moon with my sweetheart, my wife of 48 years, I imagine that streaming from its dark side are electron holes that my students and I predicted and that we then discovered,” he says. “It’s quite sentimental to me.”

Hutchinson’s studies of these wave phenomena, summed up in a paper, “Electron holes in phase space: What they are and why they matter,” recently earned the 2022 Ronald C. Davidson Award for Plasma Physics presented by the American Physical Society’s Division of Plasma Physics.

Hutchinson’s exploration of electron holes was sparked by his work over many decades in fusion energy, another branch of plasma physics. He has made many contributions to the design, operation and experimental investigation of tokamaks — a toroidal magnetic confinement device — intended to replicate and harness the fiery thermonuclear reactions in the plasma of stars for carbon-free energy on Earth. Hutchinson took a particular interest in how to measure the plasma, notably the flow at the edges of tokamaks.

Heat generated from fusion reactions may escape magnetic confinement and build up along these edges, leading to potential temperature spikes that impact the performance of the confinement device. Hutchinson discovered how to interpret signals from small probes to measure and track plasma velocity at the tokamak’s edge.

“My theoretical work also showed that these probes quite likely induce electron holes,” he said. But proving this contention required experiments at resolutions in time and space beyond what tokamaks allow. That’s when Hutchinson had an important insight.

“I realized that the phenomena we were trying to investigate can actually be measured with exquisite accuracy by satellites that travel through plasma surrounding Earth and other solid bodies,” he says. Although plasmas in space are at a much larger scale than the plasmas generated in the laboratory, measurements of these gases by a satellite is analogous “to a situation where we fly a tiny micron-sized spacecraft through the wakes of probes at the edge of tokamaks,” says Hutchinson.

Using satellite data provided by NASA, Hutchinson set about analyzing solar plasma as it whips by the moon. “We predicted instabilities and the generation of electron holes,” he recounts. “Our theory passed with flying colors: We saw lots of holes in the wake of the moon, and few elsewhere.”

Hutchinson grew up in the English midlands and attended Cambridge University, where he became “intrigued by plasma physics in a course taught by an entertaining and effective teacher,” he says.

Hutchinson headed for doctoral studies at Australian National University on fellowship. The experience afforded him his first opportunity for research on plasma confinement. “There I was at the ends of the Earth, and I was one of very few scientists world-wide with a tokamak almost to myself,” he says. “It was a device that had risen to the top of everyone’s agenda in fusion research as something we really needed to understand.”

His dissertation, which examined instabilities in plasma, and his hands-on experience with the device, brought him to the attention of Ronald Parker SM ’63, PhD ’67, now emeritus professor of nuclear science and engineering and electrical engineering and computer science, who was building MIT’s Alcator tokamak program.

In 1976, Hutchinson joined this group, spending three years as a research scientist. After an interval in Britain, he returned to MIT with a faculty position NSE and soon, a leadership role in developing the next phase of the Institute’s fusion experiment, the Alcator-C Mod tokamak.

“This was a major development of the high-magnetic field approach to fusion,” says Hutchinson. Powerful magnets are essential for containing the superhot plasma; the MIT group developed an experiment with a magnetic field more than 150,000 times the strength of the earth’s magnetic field. “We were in the business of determining whether tokamaks had sufficiently good confinement to function as fusion reactors,” he says.

Hutchinson oversaw the nearly six-year construction of the device, which was funded by the Department of Energy. He then led its operation starting in 1993, creating a national facility for experiments that drew scientists and students from around the world. At the time, it was the largest research group on campus at MIT.

In their studies, scientists employed novel heating and sustainment techniques using radio waves and microwaves. They also discovered new methods for performing diagnostics inside the tokamak.  “Alcator C-Mod demonstrated excellent confinement in a more compact and cost-effective device,” says Hutchinson. “It was unique in the world.”

Hutchinson is proud of Alcator C-Mod’s technological achievements, including its record for highest plasma pressure for a magnetic confinement device.  But this large-scale project holds even greater significance for him. “Alcator C-Mod helped beat a new path in fusion research, and has become the basis for the SPARC tokamak now under construction,” he says.

SPARC is a compact, high-magnetic field fusion energy device under development through a collaboration between MIT’s Plasma Science and Fusion Center and startup Commonwealth Fusions Systems. Its goal is to demonstrate net energy gain from fusion, prove the viability of fusion as a source of carbon-free energy, and tip the scales in the race against climate change. A number of SPARC’s leaders are students Hutchinson taught. “This is a source of considerable satisfaction,” he says. “Some of their down-to-earth realism comes from me, and perhaps some of their aspirations have been molded by their work with me.”

After leading Alcator C-Mod for 15 years and generating hundreds of journal articles, Hutchinson served as NSE department head from 2003 to 2009. He wrote the standard textbook on measuring plasmas, and has more recently written “A Student’s Guide to Numerical Methods” (2015), which evolved from a course he taught to introduce graduate students to computational problem-solving in physics and engineering.

After this, his fortieth year on the MIT faculty, Hutchinson will be stepping back from teaching. “It’s important for new generations of students to be taught by people at the pinnacle of their mental and intellectual capacity, and when you reach my age, you’re aware of the fact that you’re slowing down,” he says.

Hutchinson’s at no loss for ways to spend his time. As a devout Christian, he speaks and writes about the relationship between religion and science, trying to help skeptics on both sides find common ground. He sings in two choral groups, and is very busy grandparenting four grandsons. For a complete change of pace, Hutchinson goes fly fishing.

But he still has plans to explore new frontiers in plasma physics. “I’m gratified to say I still do important research,” he says. “I’ve solved most of the problems in electron holes, and now I need to say something about ion holes!”