Mapping the depths of plasma physics 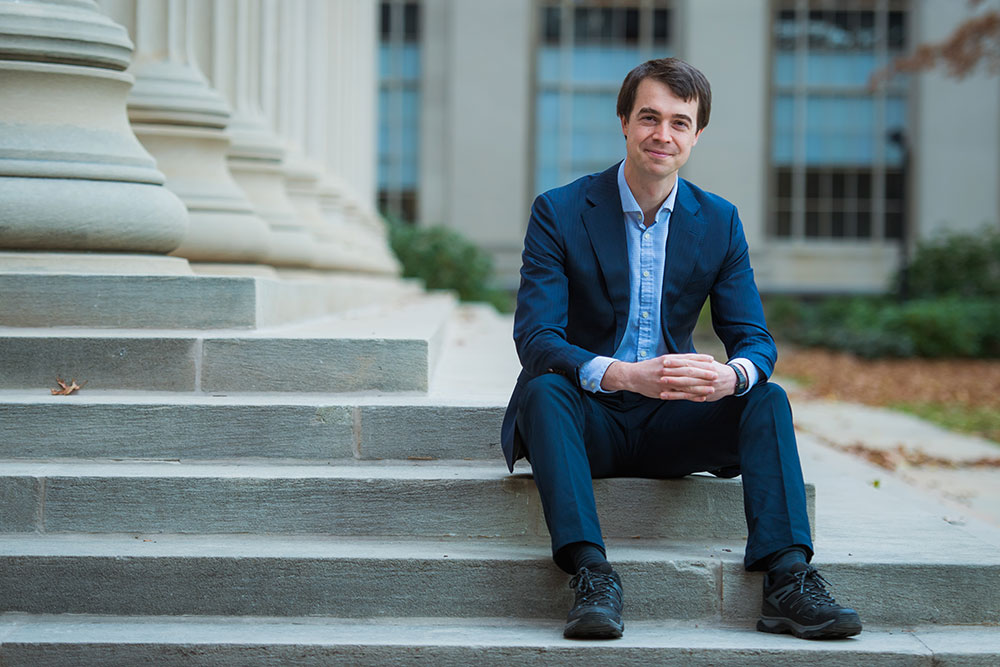 Jack Hare says running a science lab is rather like spelunking. In graduate school for plasma physics, at Imperial College London, he was part of the caving club. Each summer, he’d spend three weeks on an expedition to Slovenia, where they’d camp 600 meters underground for days at a time, mapping the subterranean labyrinths. In 2021, after three postdoctoral fellowships, he joined MIT as an assistant professor of nuclear science and engineering. “Caving was a great experience,” he says. “I think the logistics side of those expeditions—planning everything, making sure everything’s in place, carrying everything into the cave—has actually been really useful for building my lab.”

Hare studies plasma, a high-energy gas in which atomic nuclei and electrons roam around separately. He notes that virtually all the matter in the universe—stars, nebulae, the debris orbiting black holes—is made of plasma. The team creates plasma in small quantities and watches what it does. “We can generate these extreme states of matter that can tell us something about how plasma behaves in the wider universe,” he says. He calls it “laboratory astrophysics.”

Once completed, the lab’s main instrument—a house-sized device called PUFFIN (the PUlser For Fundamental [Plasma Physics] INvestigations)—will store up electricity in large capacitors, then release close to a million amps—a million times more current than flows into a lightbulb—through thin wires in a vacuum chamber, vaporizing it.

“This plasma is only around for a microsecond, a millionth of a second,” Hare says, “so you need to be able to probe it with some pretty fast diagnostics.” They’ll hit the plasma with brief laser pulses to creates silhouettes behind it. With many experiments they can put together a mosaic. An image he created at another facility during his PhD won a prize in a science photography competition. “The nice thing about this subject is you can take pictures of the plasma, and just by looking at the picture you can learn something,” he says. “It’s a very visual subject.”

At Imperial College London, which he attended after an undergraduate degree in natural sciences at the University of Cambridge, he’d used a similar device called MAGPIE (Mega Ampere Generator for Plasma Implosion Experiments). MAGPIE was built in the 1980s as a prototype for a fusion reactor. It releases current faster than PUFFIN does, so plasma survives only a few tenths of a microsecond instead of a few microseconds. Such a brief span isn’t as suitable for studying long-lasting plasmas, like those found in space. (Plasma exists on Earth mostly in lightning.) MIT doesn’t have many plasma experiments at the moment, so when Hare proposed PUFFIN, they hired him.

MIT is clearing out a space at the Plasma Science and Fusion Center on campus, and PUFFIN will open for operation in 2023. In the meantime, Hare will use machines in Michigan and at Cornell. Over the next two years, he also plans to run four experiments on a machine called Z, at Sandia National Laboratories. Each Z shot will release 25 million amps and cost around a million dollars, in part because it destroys part of the machine. For planning, he’ll run lots of simulations on supercomputers. “If you do a million-dollar shot, and your picture is blank, you’ve got some questions to answer,” he says. You don’t want to be deep underground without your lunch.

The focus of Hare’s PhD was magnetic reconnection, a process in which plasma breaks and reforms magnetic fields. In 2015, he predicted that in his experiments, he’d see a uniform reconnection layer, but instead the layer was wobbly. At a conference that year, Nuno Loureiro, a professor of nuclear science and engineering at MIT, presented theoretical results showing that it should be wobbly. Hare and his advisor approached Loureiro afterward to ask what he thought of their data. “He looked at it, and he was like, ‘Oh, wow.’ Because at that time there had not been any other experimental observations of this instability,” Hare says. Hare and Loureiro now collaborate.

Hare doesn’t work directly with observational astrophysicists. The behavior he observes is similar across scales of space and time, and he notes that experiments in wind tunnels can tell you how a full-size airplane will fly, but for him the difference is not between centimeters (model planes) and meters (real ones), but between centimeters and lightyears. Describing his relationship with observational astrophysicists, he says, “we are working on such different systems, it’s quite hard for us to speak the same fundamental language.” Instead, he talks to theorists, like Loureiro. “You kind of need a theorist to interpret both sides so that they can meet in the middle.”

Despite Hare’s focus on understanding the wider universe, his work may have practical applications. Magnetic reconnection happens on the sun, sometimes releasing plasma in the form of coronal mass ejections that can disrupt satellites and Earthly electronics. Understanding reconnection might better predict such solar storms. Plasma also occurs in fusion reactors, and basic plasma physics can improve computer models of fusion. “So before we actually build a billion-dollar fusion reactor, we can simulate it and see whether it works.”

Spelunking has one more connection to science. “In caving, it’s a really special feeling when you go to a passage where no one has ever been before,” Hare says. Beautiful formations await discovery. “In physics, sometimes you have some data and you realize you now understand something that no one else in the world does. And then of course, the important thing is to tell everyone about it.”