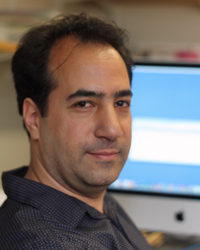 Alan Jasanoff is a bioengineer and neuroscientist who is pioneering next generation brain imaging techniques for studying mechanisms of behavior and cognition. Jasanoff's laboratory applies techniques from chemistry, molecular biology, and nanoscience to create probes for noninvasive detection of neural activity, and uses them to map and interpret previously inaccessible aspects of brain function. Jasanoff earned an AB in biochemical sciences and a PhD in biophysics from Harvard University, as well as an MPhil in Chemistry from Cambridge University. He is a Professor of Biological Engineering with joint appointments in the departments of Brain and Cognitive Sciences and of Nuclear Science and Engineering. He currently directs the MIT Center for Neurobiological Engineering and the Neurobiological Engineering Training Program. Jasanoff has been a Whitehead Fellow and a Raymond and Beverley Sackler Foundation Scholar. His first book, “The Biological Mind: How Brain, Body, and Environment Collaborate to Make Us Who We Are” was published in 2018 and featured as a top science book of 2018 by Nature, Forbes, and The Wall Street Journal.

Pushing the frontiers of MRI

Functional magnetic resonance imaging (fMRI) has revolutionized our understanding of the human brain, but the method is now approaching the limit of its capabilities. Alan Jasanoff hopes to break through this limit and to develop new technologies for imaging the molecular and cellular phenomena that underlie brain function.

Functional MRI takes advantage of the fact that when a particular brain region becomes more active it consumes more oxygen, and blood flow increases to that region increases to compensate. These changes can be detected during a brain scan because the blood protein hemoglobin changes its magnetic properties when it is depleted of oxygen.

Although fMRI has yielded much valuable information, it suffers from two fundamental limitations. First, changes in the blood are slow relative to the speed of neural activity, making it impossible to measure rapid brain events. Second, the source of the activity can only be localized to the nearest blood vessel. It is not precise enough to provide detailed information about activity in specific neurons and circuits.

Jasanoff is working to overcome these limitations. He is devising new contrast agents whose magnetic properties are altered by events in the neurons themselves, rather than their surrounding blood vessels. If successful, such an approach could reveal an unprecedented level of information about brain activity as it unfolds in real time.

The next generation of contrast agents

When neurons become active, they rapidly take up calcium from their environment. Jasanoff hopes to visualize these rapid changes using magnetic nanoparticles that are coupled to a calcium-binding protein. In collaboration with colleagues at the MIT chemistry department, he is also developing a new class of molecules that can be engineered to accumulate inside cells and to reveal changes in the intracellular chemical environment.

Another one of Jasanoff's approaches is to develop indicator molecules that can be genetically encoded and targeted to specific cell types. Jasanoff is developing an indicator for dopamine. Dopamine is a neurotransmitter that is depleted in Parkinson's disease. Many psychiatric drugs and substances of abuse target dopamine receptors in the brain. So the ability to detect changes in dopamine in living animals would have many applications for the study of brain disorders. Eventually, Jasanoff hopes it may be possible to adapt the approach for use in human subjects, thereby providing a powerful new tool for clinical research and drug development.