From Fusion to Foxtrot 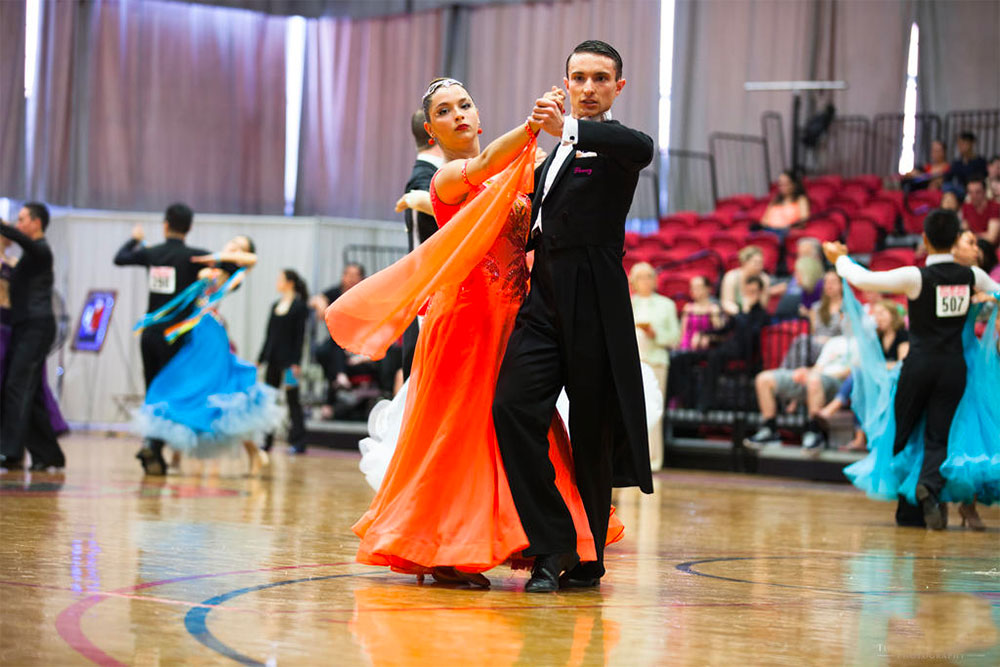 Graduate student Alex Creely’s days are full as he works to complete his PhD dissertation. Under the guidance of Nuclear Science and Engineering Professor Anne White, he is studying ways of reducing simulation times in fusion experiments, using data from tokamaks at the Plasma Science and Fusion Center (Alcator C-Mod) and Max-Planck Institute for Plasma Physics (ASDEX-Upgrade). To take a break from plasma science, and provide himself a further challenge, Creely dances competitively with the MIT Ballroom Dance Team.

What is competitive ballroom dancing?

If you’ve seen Dancing with the Stars, that’s generally what we’re up to, though without quite as much pageantry (one of the MIT coaches was actually a coach on the first season of the show).  If not, think of pairs ice skating or ice dancing, except in suits and ball gowns and without the ice.  Competitive ballroom dancing, which is sometimes called “DanceSport” in other countries, sits somewhere between art and athleticism, and evolved out of a variety of social dances.  Today there are ten competitive dances in the international circuit, five ballroom dances and five Latin dances.  The five ballroom dances are: Waltz, Tango, Viennese Waltz, Foxtrot, and Quickstep.  Latin includes: Cha Cha, Samba, Rumba, Paso Doble, and Jive. There are also a number of dances that are only danced competitively in the US and are known as American styles (Swing, Mambo, Bolero).  Personally I compete in all ten international dances.

What do you enjoy most about it?

I think my favorite thing about dance is how international it is, and how it’s possible to dance with someone even if you don’t speak the same language. I’ve danced in four countries at this point (I started dancing in the UK, danced in the US, and have spent summers dancing in Germany and Japan), and while there are definitely differences in style, the fundamentals are the same no matter where you are. Whether I’m hanging out with friends from other colleges around Boston at a competition or dancing with the University of Nagoya team in Japan, there’s always a great community.  At a social dance or dance class, I can walk up to someone I’ve never met before and dance together.  It’s an amazing feeling.

How did you start dancing?

I started dancing my junior year of undergrad, while I was studying abroad at the University of Oxford, as part of the Oxford-Princeton Exchange in Engineering. I thought I’d take advantage that year to try some new things. A friend of mine convinced me to try dancing with the competitive team. I went to a few of their beginner classes, having never danced any style of dance before, and quickly lost myself in the world of ballroom dance – even Latin dances, which I never would have anticipated. It was a great way to de-stress after working all day. I continued dancing at Princeton my senior year, and joined the MIT Ballroom Dance Team as soon as I got to MIT.  Now I love the competitions and always look forward to another day on the dance floor.

Tell us a bit about the MIT Ballroom Dance Team? How did you become involved?


The MIT Ballroom Dance Team (BDT) is a group of about 100 MIT undergrad students, grad students, alumni, Wellesley students, and other dancers in the area that train and compete in ballroom and Latin dance. The team has dancers at every skill level, from people who have just started dancing for the first time in their lives, to those who compete at the national and international level.  We practice most evenings at various places around campus, and compete a few times a semester both in Boston and elsewhere.  We also host our own competition every spring, which often has nearly 1000 competitors from around the US and the world. I knew about the MIT BDT from the collegiate ballroom circuit, and I started dancing with them pretty much as soon as I set foot on campus.

So how does ballroom dancing connect to plasma physics and fusion energy?

They’re pretty distinct pursuits, honestly, but in some ways they complement each other.  Part of the reason I enjoy dancing is that it’s an opportunity to move and get out of my head for a while. After working all day on something where you need to think about every detail and analyze everything logically, it’s great to spend time feeling, rather than thinking.  The best way to improve your dancing is to feel, not just to think, and actually, avoiding overthinking things is one of the areas that I’m working on in my dancing at the moment.

In terms of being complementary, I’ve learned things in both physics and dancing that have helped the other pursuit.  Physics has taught me that often one must work nearly endlessly on some small tedious thing in order to achieve something worthwhile, which is also definitely true in dance. Dance has taught me to think about problems differently, and to try creative solutions when something isn’t working, which also has its place in fusion.