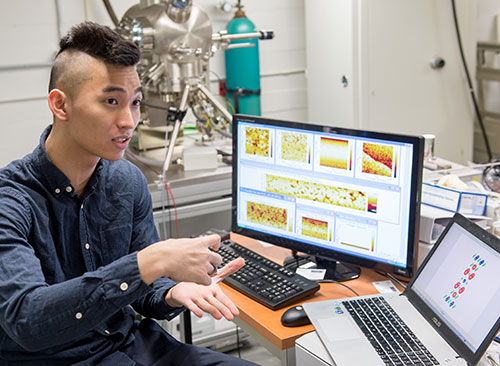 Minh Dinh has always had a love of learning; it got a big boost when he was attending high school in Hue City, Viet Nam, and a university enrichment program introduced him to nuclear physics. “It made me think, wow, this stuff is so cool, I want to learn more about it — that’s when I decided to study nuclear engineering in college,” he recalls.

Dinh arrived at MIT in 2011 as a Course 22 major and soon had another pivotal classroom experience in Prof. Bilge Yildiz’s Materials for Nuclear Applications (22.070). “That class really got my attention, and made me want to do more with materials,” he says. Now in his junior year with a 4.9 grade point average, Dinh has declared a double major in Materials Science and Engineering, and is a member of Yildiz’s research group in MIT’s Laboratory for Electrochemical Interfaces, working alongside graduate students and post-docs as part of the Institute’s Undergraduate Research Opportunities Program (UROP).

His research has included simulation analysis of solid oxide fuel cell (SOFC) performance, and exploration of the aging/degradation behavior of materials, including industry-sponsored studies of oil pipeline corrosion. The work draws heavily on groundbreaking surface analysis methods developed by Yildiz for the study of corrosion and electrochemical energy conversion materials.

Yildiz notes, “Minh is a great example of the UROP experience. For the oil pipeline project, we asked him to assess how native coatings on metal surfaces may lose their anti-corrosive qualities. He began with no knowledge of atomistic simulations, but had tremendous eagerness to learn, and he’s now able to perform simulations and analyze and discuss his results, which are helping uncover how native coatings are fractured by ubiquitous hydrogen.”

The work won an NSE Outstanding UROP award and is being prepared for journal publication; Dinh is now applying his love of programming to the performance of SOFC materials. Yildiz says Dinh’s knowledge and project experience allow him to tackle the work more independently, making a critical contribution to the group’s effort. “Experiments alone can’t point easily to the atomistic mechanisms in this problem, but Minh’s simulations can,” she adds.

One focus is how ionic conductivity of electrode materials dynamically changes under harsh conditions, or when the strain of the material’s crystal lattice is altered. “The experimental people can change the strain and see how the conductivity changes, and I can change the strain in our simulations, to see the concentration and mobility of oxygen defects, which are crucial for fast conduction in the strained structure,” explains Dinh. “We can match up the results, and validate each other’s work; the simulations also help explain the mechanisms in experiments, and identify optimal strain conditions.”

“The programming at PFSC was interesting, because they use Interactive Data Language — I hadn’t seen it before, and I like learning different languages, and the challenge of applying them in different environments,” says Dinh.

Prof. Dennis Whyte, a key figure in fusion development at MIT NSE and worldwide, oversaw that work and, like Yildiz, has mentored Dinh. “The way he can relate theory and reality is extraordinary, and I learn a lot from his way of thinking about difficult issues, framing the problem so that you can find an answer,” notes Dinh. “He’s also very friendly and easy to reach.”

As someone living far from home, Dinh especially appreciates that collegial spirit, which he finds permeates NSE. Because it is a relatively small department, he says, “we’re close, we know each other. I see my professors in the corridor, and we talk to each other — you gain more knowledge when you’re talking to people.”

Beyond his technical education, Dinh participates in the Undergraduate Practice Opportunities Program and the Gordon Engineering Leadership Program, which offer workshops with faculty and alums, and cultivate leadership skills and effectiveness in industry environments. He was also an active volunteer during NSE’s hosting of the 2013 American Nuclear Society Student Conference, and is helping create an exhibit on small modular fusion reactors for Building 24.

Dinh hopes to continue his studies in graduate school and is interested in the energy field. He is a member of the MIT Asian Dance Team, and an avid center back in intramural soccer and a soccer league for Vietnamese expats in the Boston area.

“Minh is a great example of the UROP experience. He began with no knowledge of atomistic simulations, but had tremendous eagerness to learn, and he’s now able to perform simulations and analyze and discuss his results.”