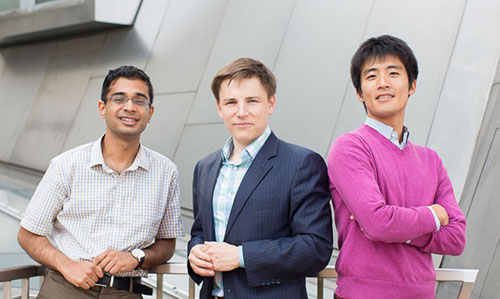 MIT’s Quantum Engineering Group (QEG) has a challenging but potentially world-changing mission: to harness the quantum properties of matter for use in information technology, metrology, defense, healthcare, and many other fields.

The interdisciplinary laboratory, headed by Nuclear Science and Engineering (NSE) Associate Professor Paola Cappellaro, is working theoretically and experimentally towards achieving quantum control — the ability to control and utilize the behavior of nano-scale particles, which obey the laws of quantum mechanics rather than classical physics. A close-knit group of student researchers plays a central role, developing basic enabling tools that could yield dividends for decades to come.

“In one sense we’re doing fundamental research, but it’s really engineering — we’re seeking practical applications,” explains Cappellaro. The QEG is based in MIT’s Research Lab of Electronics, which brings together faculty and students from many departments (including NSE, physics, materials science, and electrical engineering and computer science) and other quantum-oriented programs at the Institute.

“Everyone’s working from different directions, but the common goal is to get control of quantum systems and be able to exploit them to build quantum devices,” says Cappellaro. “The common theme is using nitrogen-vacancy (NV) centers in diamonds as a promising experimental platform for this goal.” NV centers, a type of crystal defect, allow access to nearby electrons and their intrinsic angular momentum, or spin.

Applications could include leveraging spin to create quantum bits (qubits) for information processing and storage, which would provide exponential increases in computing power, and using NV-containing diamonds as ultra-responsive sensors, able to map molecular structures or monitor nano-scale magnetic fields like those created by brain functions.

There are many hurdles. One is that spin cannot be completely isolated, and is subjected to deleterious noise. This can lead to the decay of quantum superposition, or decoherence, which represents one of the major challenges to quantum control.

Thus, the nuclear spin is a good candidate for memory functions in quantum computing, while computation could be handled with the electronic spin. Development of a control theory for interactions between the two is a research priority for Hirose, who joined Cappellaro’s lab group in 2009 after undergraduate work in Japan.

“The subject matter is a dream for me, and the QEG environment is very cooperative, everyone shares their problems,” he says. “I meet with Paola at least every couple of days, and she always welcomes new ideas, and helps figure out next steps.”

“NV centers are interesting because we can use them to control and read out the electronic spins associated with other impurities in the diamond lattice,” says Cooper-Roy. “Now we’d like to be able to put a few of these objects together so that we can do things that aren’t currently accessible, but the dynamics become really complicated.”

Cooper-Roy, who has studied in Japan and France as well as his native Canada, notes that the QEG’s research approach emphasizes work at room temperature using relatively simple equipment, which makes it possible for individuals to manage projects.

“A student can come here and build an experiment from scratch; it’s an easy test bed for exploration of quantum mechanics,” he says. “It’s great for training and for seeking practical applications. MIT is a great experience, because there’s an engineering approach — people really focus on optimizing the process. The final product is very important.”

Meanwhile, another Ph.D. candidate, Ashok Ajoy, is attacking the problem of using quantum sensor technology as a sub-molecular microscope. “We’d like to be able to determine the structure of biomolecules, like proteins,” he explains. “The structure and the function are closely tied, and this would enable, say, the design of antibiotics, or the ability to block or amplify what a molecule does.”

The current goal is to achieve resolution of a few angstroms, which requires a synergistic combination of theory and experimentation. “In our lab we do both; I like it that way,” he says, adding that Cappellaro’s personal mentorship is an important enabler.

Long term, there is the potential to achieve sensing at resolution of a single spin — “that’s the holy grail, no one has been able to measure single external nuclear spins and map out their positions,” says Ajoy, who did his undergraduate studies in India. “With these sensors that we and our community have we’re on the cusp; it’s an exciting threshold, a stepping stone to something that could be very useful going forward in all sorts of applications.”

That broad applicability has attracted funding from blue-chip sources, like the National Science Foundation and the Department of Defense. “All the work is fundamentally enabling,” says Cappellaro. “We develop the tools we use in order to create better devices, but also seek to understand the physics so we can come up with smarter ways to use them.”

“We develop the tools we use in order to create better devices, but also seek to understand the physics so we can come up with smarter ways to use them.”