Jacopo Buongiorno Bringing Outside Knowledge to the Nuclear Industry 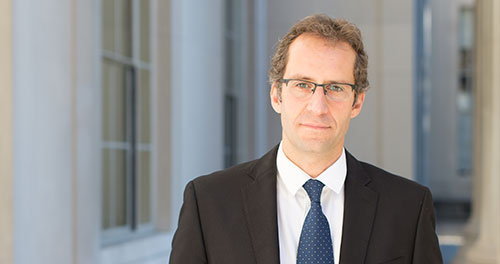 There’s a paradox facing today’s nuclear power industry. On one hand, an exciting range of new fission and fusion reactor technologies has spawned a number of startups. But at the same time, market dynamics have conspired against the uptake of enabling technologies developed in other fields that could bring new options and benefits to the nuclear sector.

“The nuclear industry has been remarkably slow at keeping up with technological advances in other industries,” notes MIT NSE Professor Jacopo Buongiorno, who also serves as director of the Institute’s Center for Advanced Nuclear Energy Systems (CANES). “There’s understandable aversion to risk, so there aren’t many opportunities to try new approaches, and regulation also lengthens the cycle of innovation — but we do see opportunities for applying innovative technologies developed in other fields.”

Extensive use of robots, for example, could lower costs and improve reliability of operations and emergency response at nuclear plants. Additive manufacturing (3-D printing) could simplify fabrication of complex components that today have to be machined and welded. And MIT NSE’s strategic plan explicitly emphasizes work with materials scientists, mechanical engineers, physicists, and other related disciplines.

But Buongiorno points to two specific areas with exceptional promise: nano-materials for enhanced reactor cooling, which could be taken up relatively quickly, and use of shipyard construction to build floating offshore power plants, which could spark fundamental shifts in the nuclear industry.

Cooling — the transfer of heat from fuel rods to the surrounding water — is a critical reactor function. “Boiling [of the cooling water] is a very efficient means of heat transfer, but there can be too much boiling,” explains Buongiorno. “If bubbles coalesce on the fuel rod surface, they start to act as an insulator. Then energy stays in the fuel rods, which can overheat.”

Buongiorno, with colleagues in NSE and faculty from MIT’s Chemistry and Materials Science and Engineering departments, led the first systematic studies on the effects of surface characteristics on boiling heat transfer. The team found that films of nanoparticles on fuel rods, just a few microns thick, created a hydrophilic porous layer that prevented bubble coalescence and enabled more-efficient heat transfer at higher temperatures.

That, notes Buongiorno, could allow reactors to run at higher power, generating more megawatts from the same fuel load. A related innovation: adding nanoparticles to the cooling water itself. During operation, these particles precipitate onto the fuel rods, creating structures akin to those produced by the coatings. “The bottom line is a surface that promotes better boiling,” he adds.

Both techniques appear relatively easy to retrofit into existing reactor designs. “There is clear industrial interest,” says Buongiorno. “We have a contract with Westinghouse, and a proposal at ARPA-E, the Department of Energy’s advanced projects agency. I hope it will not take a decade-long process for introduction — it could grow fast if the testing goes well.”

A more ambitious project involves tapping the expertise of maritime construction companies, which build extremely large floating structures (such as oil rigs and LNG terminals) as well as nuclear-powered vessels.

Buongiorno explains that building a power plant on-site can cost many times as much as construction in the controlled conditions of a shipyard. Moreover, he adds, “nuclear submarines and aircraft carriers, which can be viewed as floating nuclear power plants, are built in record time, in certain cases as short as 36 months, with quality of production that is probably superior to civilian nuclear plant construction. Land-based plants can take up to 10 years to build.”

Buongiorno and NSE colleagues Michael Golay and Neil Todreas have developed a basic design for a floating nuclear power plant, which would be moored within a nation’s territorial waters and linked to shore via underwater cable. The structure would be essentially immune to earthquakes and tsunamis. Housing reactors in containment structures below the waterline would ensure an ample supply of emergency cooling water, and there would be no nearby residents.

“You reduce capital costs and the construction schedule, so there’s a big financial benefit,” says Buongiorno. “There are, rightly, concerns about the health of the oceans, and security questions, and those must be addressed, so it’s still a big hurdle. But nuclear-grade marine structures are routinely built and launched — there have been many more marine reactors than land-based ones.”

The best opportunities may be in Pacific Rim nations, which need power and face seismic risks. The NSE team is considering formation of a company that would hold intellectual property for the concept, and facilitate a consortium of companies that would design, build and operate a fleet of standardized plants.

“The key question is licensing, making sure we’ve identified all the possible threats and scenarios, and making a compelling case for national and international regulators,” notes Buongiorno. “Our success would be measured by how quickly we could get out of the way.”

And more broadly, NSE’s ongoing pursuit of interdisciplinary innovation will continue seeking opportunities from other fields in areas ranging from materials diagnostics to quantum engineering to fusion to policy