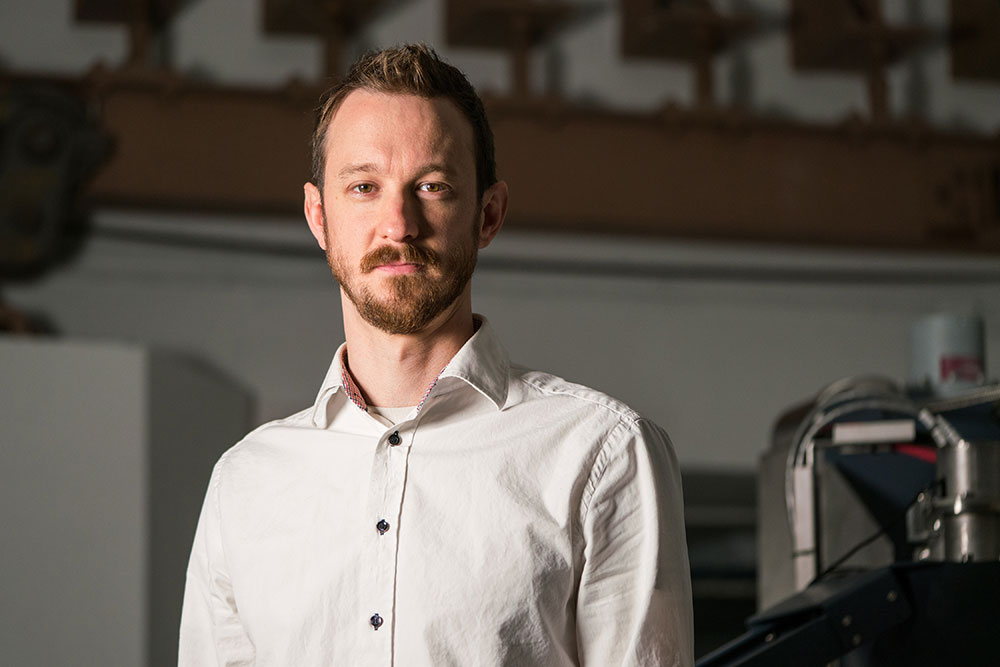 Making nuclear fusion a practical energy source is a complex challenge that will require diverse capabilities — like the scientific, engineering, communication, and leadership skills that Zach Hartwig has applied during almost a decade of doctoral and post-doc work at MIT’s Department of Nuclear Science and Engineering.

Hartwig, who was recently named an NSE assistant professor, has helped develop a groundbreaking materials diagnostic system for the Alcator C-Mod fusion reactor, led the establishment of a new ion accelerator lab, advocated for scientific research before a variety of audiences, and, with a team of other post-docs, proposed a promising new strategy for fusion energy development.

All these align with MIT NSE’s ongoing mission of using nuclear technology to benefit society and the environment. “There’s a rising energy in the department today,” says Hartwig, who also holds a co-appointment at MIT’s Plasma Science and Fusion Center (PSFC) and affiliation with the Laboratory for Nuclear Security and Policy. “A sense that, yes, we need to do research and train students, but also that it’s our responsibility to get beyond our walls and have a positive impact in the world.”

Hartwig’s current focus is the compelling prospect of applying new-generation high-temperature superconducting magnet technology in fusion reactors, and developing innovative technology and funding frameworks that can accelerate fusion’s deployment onto the electric grid. The strategy, which centers on a “faster-better-cheaper” approach to technology development and aggressive pursuit of net energy gain from controlled fusion, was developed by the PSFC team of Hartwig, Dan Brunner, Bob Mumgaard, and Brandon Sorbom, and is at the heart of new directions in fusion energy research at NSE and PSFC.

Newly available superconducting materials like REBCO (a single-crystal material composed of yttrium, barium, copper, oxygen and other elements) allow the creation of unprecedentedly high-field magnets. They could enable smaller and less-expensive versions of venerable tokamak-type fusion reactors (like the now-shuttered Alcator), in part because a doubling of magnetic field strength produces a 16-fold increase in fusion power density. Hartwig says a fast-track high-field magnet development program, followed by possible building of a compact, net-energy-gain tokamak in the next 5 to 10 years, would be a watershed, forever dispelling fusion’s reputation as being always in the future.

“If and when we do that, fusion will ramp exponentially, just as fission did,” says Hartwig. “But we need to hit it in, say, 2025 or 2030, not 2080, if fusion is going to help mitigate the worst effects of climate change. We believe high-field REBCO magnets enable us to do just that."

Private funding, driven by the huge commercial opportunities of a safe, carbon-free, always-on energy source, could complement government support of fusion energy sciences. Hartwig points to comparable efforts in space exploration, cancer and brain research, oceanography, and other fields, and adds that the high-field magnet approach to fusion is a good fit — a transformational breakthrough that’s well-matched to investors seeking high-impact solutions to global climate change.

“Much smaller reactors are cheaper and require less of an organization — they can be built by a university, and let us move faster and try more things,” he says. “And if it really doesn’t pan out, it’s better to find out quickly.”

“It’s the first new cyclotron on campus in decades,” notes Hartwig. “Accelerators are good scientific tools; they’re usually associated with high-energy physics, but they’re primarily an industrial tool for measuring and modifying materials properties. Even as a student and postdoc Zach formed the seeds of his new lab: “we did have a vision; there was an underutilized space and some pre-existing grants, and we poured in elbow grease.”

The new accelerator, which sits alongside three older systems, provides much higher energy particles, allowing investigation of previously inaccessible reactions and phenomena. One top priority is nuclear security, and development of systems that can quickly and safely detect nuclear materials in freight containers. But the lab is also making connections between NSE faculty, students and staff.

“It’s centrally located, and brings together people from many different groups in the department,” notes Hartwig. “There’s so much expertise, the accelerators have lots of possible applications, and we’re all tinkerers. I predicted four years ago that it would have visitors every day, and I was right — we should sell tickets.”

That outlook reflects Hartwig’s appreciation of collegial teamwork, and of the research community in and around NSE, which includes facilities like the PSFC, fission-oriented Nuclear Reactor Laboratory, Center for Advanced Nuclear Energy Systems, and laboratories for materials, corrosion, magnets, and quantum technology.

“That’s a lot of big facilities, and most don’t exist anywhere else,” he notes. “Having all those capabilities at a university is probably unique in the world, and it creates a lot of opportunities, in fusion and other areas, for MIT to do what only MIT can do — put things together and be the fabric where innovation occurs.”