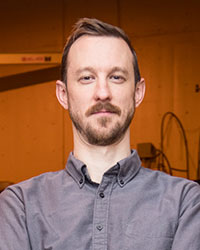 Plasma Science and Fusion Center
CSTAR: Center for Science and Technology with Accelerators and Radiation

Zachary Hartwig joined the Department of Nuclear Science and Engineering in January 2017 as an assistant professor and holds a co-appointment at the MIT Plasma Science and Fusion Center (PSFC). He received his PhD from MIT in 2014 for the development of a novel accelerator-based technique that advanced the ability to study the dynamic interaction of confined plasmas and the surrounding solid materials — known as plasma-material interactions — in fusion devices. Before joining the NSE faculty he was a postdoc at the PSFC, where he developed diagnostic techniques for plasma-material interactions, leading the establishment of a new laboratory for accelerator-based nuclear science, and leading the design of high-magnetic field net energy gain fusion devices that leverages new superconducting magnet technology. Hartwig’s research focuses on the development and application of particle accelerators, radiation detectors, and computational radiation transport simulations to magnetic fusion energy and radiation damage in nuclear materials. He is the principal investigator leading development of high-temperature superconducting magnet techonology on the SPARC project at the PSFC.

Ion accelerators have played a strong role in magnetic fusion energy research, particularly in making precision measurements of surface properties of materials that are routinely in contact with fusion plasmas. Our laboratory is working on novel applications of accelerators, including the use of compact ion and electron accelerators as in-situ materials diagnostics on magnetic confinement fusion experiments and the use of ultracompact, superconducting cyclotrons to investigate radiation damage in structural and diagnostic materials in fusion environments.

A new generation of high-temperature superconductors — known as REBCO — that can be used to achieve very high magnetic field fusion magnets has transformational potential on the size, cost, and deployment times of burning plasma-class magnetic fusion experiments. The development and application of advanced Monte Carlo particle transport simulations –—a field known as fusion neutronics — plays a critical role in generating high-fidelity input into the engineering design and radiation safety assessment of such devices. Such codes will also play an important role in diagnostic development and experimental data interpretation.