Eighty-six, and still looking ahead 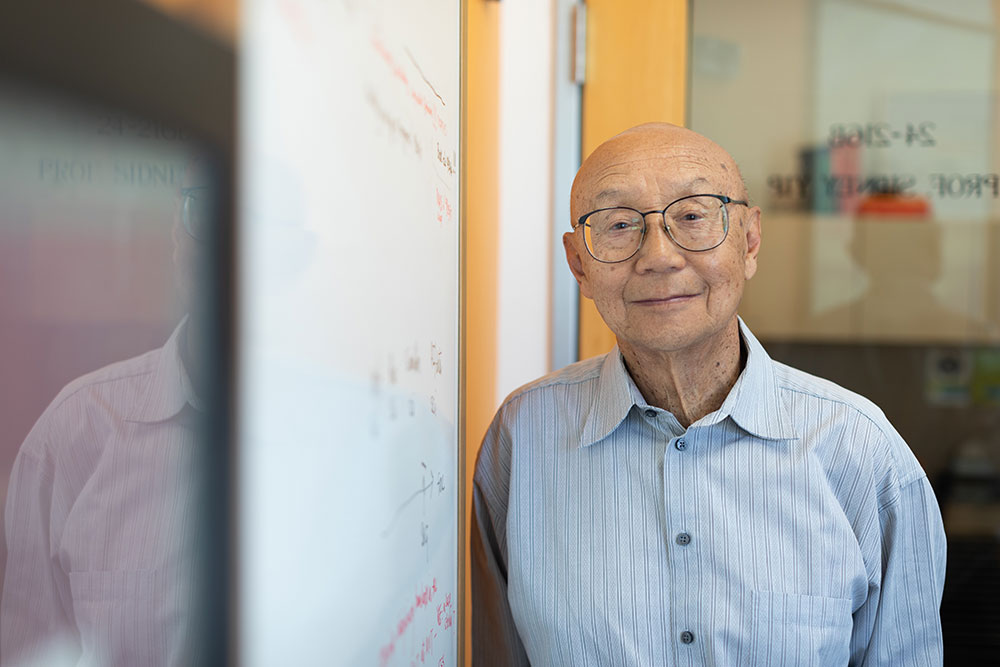 In the forward to his memoir in progress, Sidney Yip describes his life, and 50-plus-year career as a professor of nuclear science and engineering (NSE), as touched by “luck and contentment.” But while the 86-year-old emeritus professor finally has some time to reflect on his past, he finds it difficult to wind down professional commitments, even as he basks in the Santa Barbara sun.

“The ties are not severed; they are being stretched three thousand miles,” he says. “I like my work so much that I don’t know when to cut it off, especially when no one forces me to.”

Although he officially retired in 2009, Yip has maintained an active research life until very recently, coauthoring a paper in 2022 on plasticity in metallic nanocomposites,  and in 2021, contributing to an investigation of concrete pavement durability  published by MIT’s Concrete Sustainability Hub in collaboration with other universities.

In 2020, Yip completed a massive undertaking: an update of the 6,000-page “Handbook of materials modeling, second edition,” written with Wanda Andreoni. This foundational text for materials research describes the critical role of computation in improving materials essential in a range of applications, whether photovoltaics or bioengineered systems.

These late-blooming creations point to Yip’s habitually prodigious output and wide-ranging interests. He attributes a good part of this productivity to his membership in a vibrant research community. “Everywhere I built up associations, and doors opened and I kept going forward,” he says. “I could not have wanted a more rewarding career.”

An offer he couldn’t refuse

Yip tags two lucky breaks in his life: the first was his family’s exodus from China to the United States in 1950, and the second was his recruitment to MIT by Manson Benedict, “the revered, founding father of our department,” as Yip calls him. Benedict, an institute professor who worked on the Manhattan Project, plucked Yip from the University of Michigan, where he had received his bachelor’s and advanced degrees. “He invited me for an interview, and the next day offered me a job,” recalls Yip.

Upon arrival at MIT in 1965, he set about making his mark in the rapidly expanding field of reactor physics, focusing on the theoretical side. “I was just working my head off,” he says. With partners on the experimental side, Yip developed models for the phenomenon of neutron scattering in reactors, which refers to collisions that occur between the atomic nuclei of fissionable substances and materials such as metal alloys. Data from these pinball-like impacts offer important clues about the pace of fission in nuclear reactors, and can help predict the performance and durability of materials under extreme temperatures, stress and radiation.

Yip’s early studies influenced the development of nuclear materials designed for reactors. But from the start, his interests stretched beyond nuclear energy. “My motivation has always been to work on fundamental problems regarding concepts and physical insights,” he says.

He developed tools for investigating a range of consequential materials, contributing to studies of molecular hydrodynamics, the mechanical properties of crystalline solids, stress corrosion fatigue and deformation in metals. In 2009, Yip received a joint professorship in materials science and engineering, which arrived soon after he helped launch the MIT Concrete Sustainability Hub.

In 2007, the link between concrete and CO2 release into the atmosphere was just emerging, Yip recalls, and there was skepticism around this topic of research: “People’s first response was that concrete is boring, dirty, filthy, cheap, it’s not in fashion, please go away.” With a core group that included Franz-Josef Ulm, professor of civil and environmental engineering at MIT and Roland Pellenq, then a visiting professor from the University of Marseilles, Yip began researching improvements in this common building substance that could help reduce greenhouse emissions. “What was fascinating for me was that this was a material everyone uses, like dough in bread, consisting of nothing more than calcium, silicon, oxygen and hydrogen with a wonderful, mysterious chemistry.”

Yip’s ever-widening scope of research interests led to more than 400 journal publications and books, including a textbook based on one of NSE’s required classes, nuclear radiation, which Yip taught for many years. “The contribution I’m most proud of in my career is whatever influence I had on younger people who studied and worked with me.”

He also feels great pride in the accomplishments of his research partners and colleagues, in and out of MIT, but especially at NSE. Yip cites work addressing the issue of fouling on heat transfer surfaces due to molten salt coolants, a problem that applies to both fission and fusion power reactors.

He lauds the “marvelous genius” Richard Lester, Japan Steel Industry Professor and associate provost, who became NSE department head in 2009, for setting a new direction for the department. “We went from the oldest department in the School of Engineering to the youngest, and his administration came up with a wonderful idea of Science: Systems: Society (for our mission)” says Yip.

In pursuing this tripartite mission, the department came to unite what had been competing areas of research, Yip says. “Before SSS there was always some tension between the light-water reactor part and the plasma and fusion center of NSE,” he says. “Now there is much collaboration between both parts of NSE, and a holistic way of educating our students.”

For Yip, the department motto should also stand for science, solutions and society. “I believe we are at a crossroads, feeling the pressure of climate change,” he says. But with the fraught nature of public discourse these days, “society is flashing red and green,” says Yip, which makes it difficult for NSE to offer helpful technological approaches to meeting this grand challenge.

In spite of these obstacles, Yip remains invested in the department’s mission, even at a three-thousand-mile remove. “The world is proving to us how bad things can be if we’re not together,” he says. “We should talk to each other, organize and move forward together.”

For his part, Yip is planning a “last act,” as he calls it, somewhat rhetorically. “At 86, how many more things can you do?” He is penning for MIT Press a small volume of 15 standalone essays drawn from his five decades of theoretical research and atomistic simulation. “Writing and staying in touch with NSE and various colleagues at MIT and elsewhere are enough to keep me happily engaged,” he says.