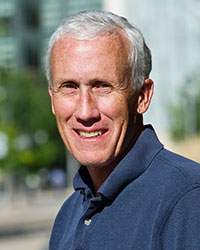 Emeritus Professor of the Practice of Nuclear Science and Engineering

Modern computing has made possible vast improvements in physics models used for reactor analysis, and many approximations in current-generation tools are being systematically improved or eliminated.  Significant verification and validation (V&V) challenges are being addressed as new methods are prepared for deployment in production tools.  Our group is engaged in an effort to use data from operating LWRs for qualification of new methods.  As data is analyzed, open-literature benchmarks are being prepared for use in V&V efforts within the broader nuclear industry.  Students have opportunities to develop not only improved analysis methods, but also new techniques for V&V.  Students also help support nuclear utilities and fuel vendors by solving practical reactor analysis problems.

As DOE’s Office of Science pushes the frontiers of advanced computing to the Exascale (1018 FLOPS), significant challenges are being encounter in the design and utilization of these massively-parallel machines - which will have hundreds of millions or billions of compute cores.  DOE is sponsoring three interdisciplinary “co-design centers” that are tasked with simultaneously designing hardware and software for deployment on machines in 2019.   Our group is an integral part of one center, CESAR, the ANL-led Center for Exascale Simulation of Advanced Reactors, working together with industrial partner IBM.  Fundamental research on basic reactor modeling methods, massively-parallel algorithms, software architecture, and computer hardware design are underway.  CESAR provides unique opportunities for students to be involved in large interdisciplinary HPC projects, and students will be exploring parallel communication bottlenecks, developing new algorithmic approaches, and testing large-scale GPGPU utilizations.