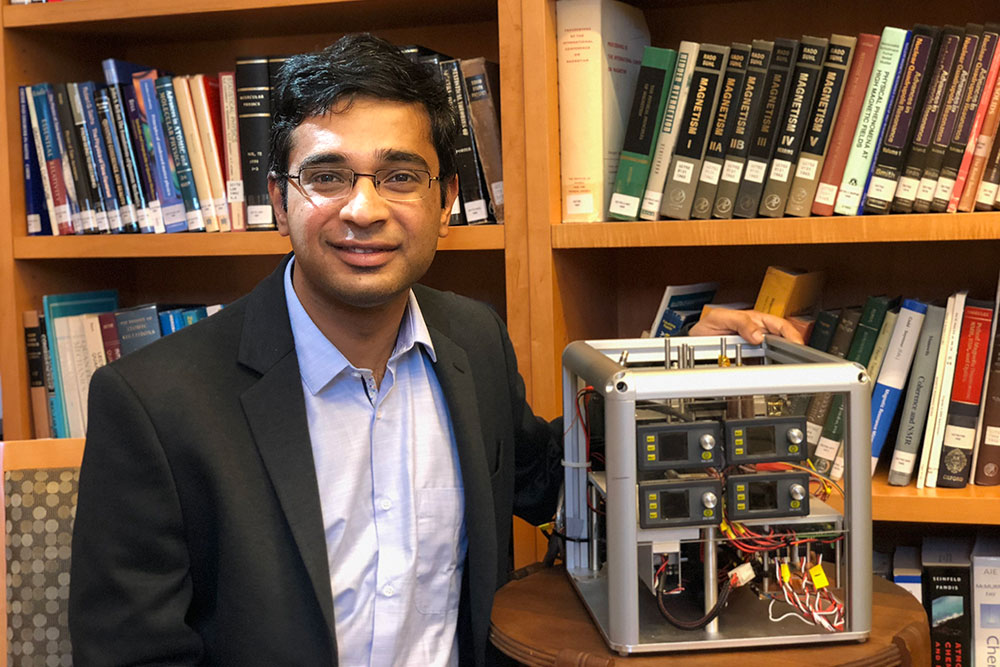 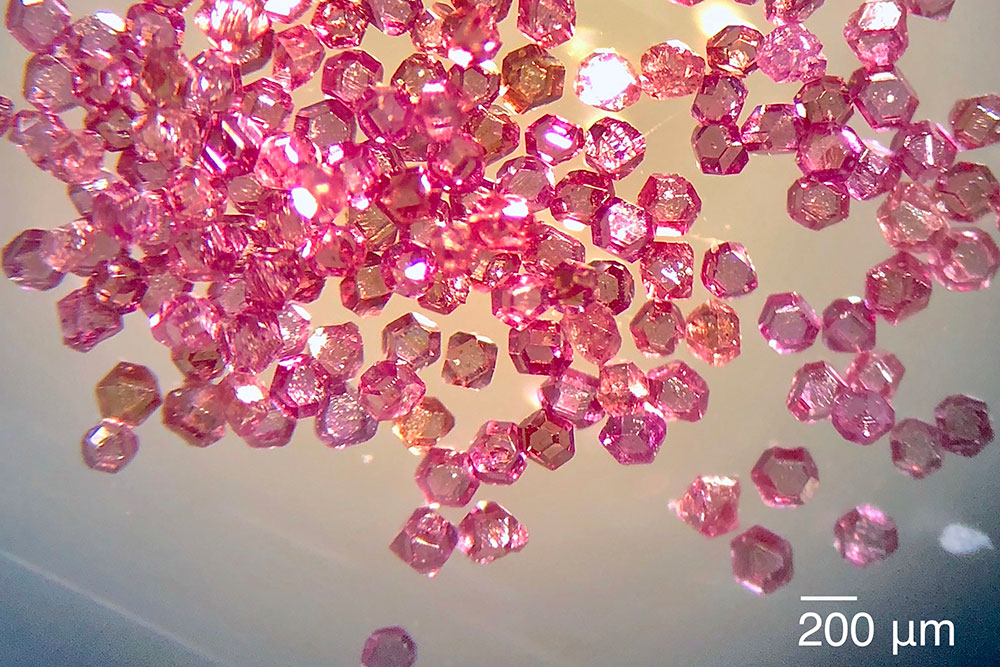 Listening to Ashok Ajoy PhD ’16 in nuclear science and engineering talk about his work, it’s easy to forget he’s a physicist:  “I make spins dance together, go up or down, interact, in a kind of spin choreography,” he says.

Ajoy unleashes his creativity not on human bodies but on elementary particles, manipulating quantum behavior, and specifically, spin—the property of angular momentum intrinsic to such entities as atomic nuclei.

After doctoral research at MIT generating insights on spin and novel methods for maneuvering quantum mechanical objects, Ajoy is now pioneering technologies with the potential to transform the fields of imaging and chemical analysis. Using diamond dust, laser light, and water, Ajoy and his colleagues at the University of California, Berkeley are pursuing alternatives to the multi-million dollar, room-size machines in current use.

“Our vision is to achieve conventional magnetic resonance imaging (MRI) at a fraction of the cost and to revolutionize industries that rely on nuclear magnetic resonance (NMR) to study molecules, such as pharmaceutical companies,” he says.

These emerging technologies reflect Ajoy’s lifelong passion not just for understanding how things work, but for crafting things that work better. Growing up in Bangalore, Ajoy says he “learned that building something and making a mess is fun.” His dad, “a gizmo freak,” found ways to use parts intended for other applications, like building a revolving table from a washing machine rotor. “He was really creative, and while I didn't acquire his genes, he really inspired me,” says Ajoy.

In college, Ajoy secured the key to the physics lab, where he “hung out the entire night, trying to make signal generators and other basic instrumentation on the cheap.” It was here that his fascination for quantum engineering crystallized: “I wanted to build my own version of an NMR machine, a spectroscopy instrument that could function without the expensive magnet.”

Ajoy’s ambition was to leapfrog technology launched at MIT after World War II. “Using equipment lying around in the radar lab, scientists saw that by shining radiofrequency—electromagnetic radiation—on water, they could produce a signal from deep inside the nucleus of hydrogen atoms," says Ajoy. “It was the birth of NMR and MRI.”

This signal, generated when nuclei in hydrogen atoms align in the presence of a magnetic field (a manifestation of quantum mechanical “spin”) sparked new imaging technology. With MRI and NMR, magnets generate an imbalance in spin orientation of hydrogen nuclei in water molecules, and machines read that imbalance. As this technology has matured over decades, the size and strength of the magnets has grown, with some NMR machines used for molecular analysis occupying entire building floors.

It was not until Ajoy arrived at MIT for doctoral work that he was able to delve directly into the spin physics that pointed toward a magnet-free approach to imaging. He found research freedom and support in the lab of Paola Cappellaro, Esther and Harold Edgerton Associate Professor of Nuclear Science and Engineering.

“Paola was an incredible advisor. She gave me creative license to build something from scratch,” says Ajoy. “At MIT I found the encouragement to work on ideas that others had not before.”

A new spin on sensing

With Cappellaro’s Quantum Engineering group, Ajoy exploited a spin system found in the atomic lattice of pink diamonds, in which a single nitrogen atom replaces a carbon atom. This is called a nitrogen vacancy (NV) center. In response to carbon atoms, the two electrons on the nitrogen atom become one, “with very nice properties,” says Ajoy. “With just the light of a green laser pointer, you can control the spin state of this electron, making the spins do precisely what you want.”

Before experimental work, Ajoy spent several years theoretically modeling NV center ideas, which he published in a series of journal articles; “One paper garnered attention, because it made a compelling proposal that using light, not large magnetic fields, we could create sensors from our NV spin system to determine the structure of a single molecule.”

Discerning molecular structure molecule is essential to making new compounds, such as drugs. While X-ray crystallography and NMR can accomplish this feat, these techniques are limited: not all molecules can be crystallized for X-ray imaging, and NMR requires large samples of a substance to image.

When Ajoy finally got his chance to build a machine to test his theories, he says, “We were short on resources, so we planned it down to the last mirror,” he says. His experimental findings, demonstrating a method for extremely high resolution, NV-center nanoscale imaging, proved nonetheless groundbreaking, and were published in PNAS.

His group is rapidly advancing into new territory:  crushing pink diamonds into dust to increase the surface area of a spin-based imaging device so that even a tiny amount of light can align the spins. The next goal is to flow water through a device containing optically polarized diamond dust, creating polarized liquid.

“It’s like science fiction, because you could take this activated water, which is perfectly safe, and inject it into a body, creating an MRI picture that's 100 times brighter than conventional MRI,” says Ajoy. “For the cost of perhaps the front display used in a $3 million dollar magnetic imaging machine, you could build our instrument.”

This vision is swiftly moving beyond the realm of science fiction. Over the course of four months, Ajoy's team constructed a prototype imaging device a bit bigger than an iPhone for $3,000. If the group can polarize liquid with it, they will have an inexpensive, portable imaging instrument perfect for wide-ranging medical applications.

“It will be proof that quantum technologies really work, and that it is possible to create something both visionary and tangible in a relatively short time,” says Ajoy. ”It feels incredible to be pushing the boundaries of human knowledge.”